Mets fans have been through a lot. So when Mets pitcher Matt Harvey appeared on the cover of “Sports Illustrated”this past May, it was a sign of hope. Despite the dismal season, the Mets still currently remain in. Harvey won over the hearts of Mets fans, and was coasting sky-high in what was an all-star season for him. Mets fans would count down the days for “Harvey Day” where he tore it up on the hill time and time again.

Then came the heartbreaking news: On August 27, it was revealed that Harvey had a partially torn ulnar collateral ligament in his pitching elbow. In other words, it seemed that Harvey may need the infamous “Tommy John” surgery that would hypothetically keep him out of baseball for a year or so. The surgery would be devastating for the Mets’ rebuilding plans, which general manager Sandy Alderson had said would be complete in time for the 2014 season.

The day after the news, Matt Harvey tweeted that he would be ready for April 1. It was simply written off as Harvey’s optimistic opinion, but after consulting more doctors, Harvey officially revealed that he is doing everything possible to avoid surgery. Due to the fact that he has a partial tear instead of a complete tear, Harvey will be rehabbing his injury in the offseason to see if he’s able to overcome this set back. Mets fans are eagerly awaiting his progress, and Alderson remains positive towards Harvey’s rehab and the Mets as a whole for 2014.

The fans of the orange and blue have endured several seasons of irrelevant baseball. The Mets have not had a playoff team since  2006, and along the way there have been some incredibly lazy teams that don’t seem to have any interest in real competition. In order for the Mets to continue their path of redemption, a completely different attitude adjustment is in order. This is exactly why Harvey’s injury is so concerning to Mets fans.

The drive that Matt Harvey brings every night he pitches is exactly what the Mets have been lacking. For a team that’s suffered injuries, free agent departures and Ponzi scheme scandals, Harvey is the man that has brought back the spark of meaningful Mets baseball. He brings a level of intensity every time he pitches that all Mets players should idolize. Harvey is a glimpse of the Mets bright future.

Harvey’s attitude towards his injury set back is exactly how he’s been with everything else. He will do whatever it takes to overcome it and be on the field for the Mets home opener next season. Sandy Alderson promised Mets fans that the team will be legitimate contenders in 2014, and there’s no doubt that without Harvey, it would be a different story.

Harvey’s willing to sacrifice his own individual health to be there when the team needs him the most. That kind of dedication hasn’t been seen in Mets baseball for quite some time. Harvey is a hero to Mets fans and he has earned that reputation. 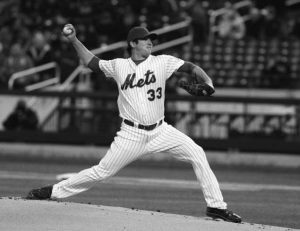