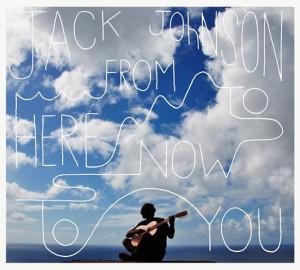 Jack Johnson is presenting another album full of bright, laid-back songs that can add some sunshine to anyone’s day. The new album titled “From Here to Now to You” was released on September 17, recorded through Bushfire Records in his own Mango Tree studio located on the picturesque island of Hawaii. Johnson’s sixth studio album is (to no surprise) bouncy and meaningful, just as all of his previous albums have been for his fans.

About a week before the album’s release, there was a video streaming on iTunes of footage shot by Johnson’s friend and manager, Emmett Malloy. This video was a montage of the making of “From Here To Now To You,” with all of the songs of the album playing along with it. There were also beautiful video clips of blue oceans, sunsets, surfing, Hawaiian nature—all things that inspire Johnson to create the type of music he does.

“I Got You” is the first song on the album and the first single that was released off of it. The video that was released along with it depicts Jack Johnson’s personality and musical style impeccably. Long boarding through the streets, hanging by the ocean, all while playing his acoustic guitar and enjoying the simple things in life. Johnson writes and sings about how much he and his wife are there to support each other no matter what the situation holds, in an extremely catchy manner.

“From Here to Now to You” features several memorable, upbeat songs. “Shot Reverse Shot,” “Tape Deck,” and “Radiate” are songs that you will find yourself singing all day long—and not in the annoying way. “Tape Deck” tells a story of a group of kids getting together to become a big punk band that everyone will love and end up doing it just for the fun and laughs. These songs balance out the other songs that mirror his mellow musical style.

Johnson’s previous album, “To The Sea,” featured a song about his daughter—“My Little Girl.” This album also has a sweet song dedicated to his daughter, showing how loving he is towards his family. “You Remind Me of You” is a touching acoustic song that can be played at any father-daughter dance. Johnson never disappoints when coming up with his beautiful lyrics paired with his acoustic guitar melodies.

The day before the album released, Johnson performed at the iTunes festival in London that was broadcasted live all over the world. There, he played both old and new songs to kick off the “From Here to Now to You” tour, which is going across the U.S., Canada and all the way to Australia. Johnson is an artist and environmentalist who always goes above and beyond. “From Here to Now to You” has beachy, surfer vibes combined with breezy, relaxing lyrics. This album is exactly what fans would expect from Jack Johnson, and they would not want it any other way.