On May 3, 2012, Mariano Rivera, the best closer in baseball history, tore the ACL in his right knee in a freak batting practice incident before a game against the Kansas City Royals at Kauffman Stadium. He was participating in his usual pregame warm-ups, shagging fly balls in the outfield, when his knee gave out under him. His 2012 season was over.

The then 42-year-old Rivera had two choices: he could  take the easy way out, just retire on the spot and live on in baseball glory as one of the best ambassadors to the game. Or he had the choice to rehab his knee throughout the offseason and comeback for one more season and go out on his own terms.

Luckily for Yankee and baseball fans everywhere, he chose the latter of the two. After a rigorous winter getting his knee back into playing shape, Rivera, now 43, made the  announcement on March 9, that this would be his last year. With his announcement, the baseball world realized that this season would be their final chance to say goodbye to the Sandman. Rivera’s farewell tour has been nothing short of spectacular.

Every stadium he has gone to, whether the lowly Petco Park, home of San Diego Padres, or Fenway Park of the arch rival Boston Red Sox, has honored him with some sort of gift and a standing ovation from fans. During the all-star game at Citi Field, he came into pitch the eighth inning. While jogging out of the bullpen to the mound, American League manager Jim Leyland made sure to keep all of the fielders on the bench, so the fans could honor Rivera. A lot of people who do not follow baseball are asking, “Why is this one player getting such special treatment from the fans, announcers, players and everyone else involved in baseball?”

One reason was Rivera’s dominance. Throughout his career, Rivera has gotten the most saves in Major League baseball history (over 650) by just throwing one pitch, his nasty cutter. His dominant cutter is best known for breaking bats due to the speed and movement of the ball. In his 17 year career, he was part of an astounding 13 all-star games. He has saved at least 40 games nine times and has a career regular season ERA of under 2.30.

Those are just his regular season stats. His playoff numbers are somehow even more impressive. He has a career postseason ERA of 0.70 and 42 saves, both are MLB records. If a team needed three outs to finish off a game, there is no better option than number 42. But his skills can’t be the only reason why people adore him.There are so many talented athletes throughout history that have retired and have not gotten the same adulation as Mo.

One of the most respected things about Rivera is the way he acts at the end of games. Whether he gets the save, or in a very rare situation, blows the game, he acts the same way. He doesn’t scream, he doesn’t brag, he doesn’t give his teammates an evil glare when someone commits a costly error. Rivera respects his teammates, his opponents, the umpires and the game. Even when he blew an important game, his humility showed.

In Game 7 of the 2001 World Series against the Arizona Diamondbacks, the Yankees led 2-1 in the ninth inning. But the Diamondbacks came back and ultimately won the World Series off a walk off bloop single by Luis Gonzalez. As the series ended Rivera walked off the field and calmly answered the media’s questions with grace.

Three years later, the Yankees faced the Red Sox in the 2004 ALCS. The Yankees hopped out to a 3-0 series lead, in full control to advance to the World Series. Rivera blew Games 4 and 5, allowing the Red Sox to stay in and eventually win the series in 7 games. The following season, the Red Sox had their World Series ring ceremony and the opponent that day was the New York Yankees. When they announced Rivera’s name, the Boston crowd cheered in a sort of mocking manner. But Rivera just smiled and laughed, tipping his cap towards the crowd in a sign of good sportsmanship.

Also, during this season, Rivera made sure to go out of his way to a special group of season ticket holders at each stadium to speak with them and thank the fans for coming out to watch him all of those years.

Mariano Rivera was a talented ballplayer on the field and a class act off it. He will be missed on the diamond for years to come. But in five years, he will be inducted into Cooperstown and no one deserves it more. 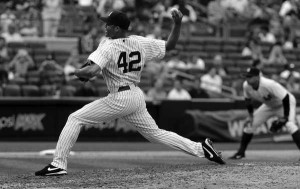