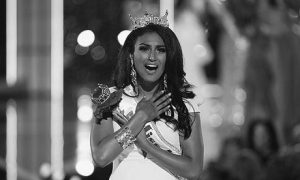 “She’s beauty and she’s grace…she’s Miss United States.” Nina Davuluri is an Indian-American from Syracuse, New York, who recently won the title as Miss America 2014. Miss Davuluri is the first Indian-American to win the title. Nina competed against 52 other women in the following areas: bathing suit, evening wear, talent and a question from the judges. Nina’s poise, style and talent guided her to a spot in the final two. Co-host, Chris Harrison, finally announced Miss America 2014 as Nina Davuluri. The crown was placed on her head and she then made her first walk as Miss America. Nina Davuluri wore a proud smile as she gracefully waved to the crowd.
Not even minutes after Nina was crowned, people took to twitter to express their negative opinions on her win. Twitter exploded with tweets like, “This is Miss America…not Miss Foreign Country,” or comments like, “Miss America should be more American.” The cultural insensitivity towards an Indian-American winner caused huge controversy in the twittersphere. The runner-up, Crystal Lee, stated regarding the negative backlash “that people should be ashamed of themselves.” The comments towards Nina relate to the question she was asked concerning Julie Chen’s recent admission to having plastic surgery in response to racism in broadcast news. Nina answered the question by making an important statement, saying “Miss America is no longer someone with the girl next door appearance, and she is evolving as diversity in America is as well.” The comments on social media are the opposite of what Nina Davuluri represents and fortunately Nina did not let the hurtful comments affect her win. Davuluri says, “she must rise above what others say.”
As Nina Davuluri starts her reign she will use her platform “Celebrating Diversity through Cultural Competency” to help America celebrate Diversity. Hopefully Nina will use her new position as Miss America 2014 to educate and thus prevent similar situations from occurring in the future.