On August 21, cellphone footage appeared on YouTube showing hundreds of men, women and children lying dead on the floor of a hospital morgue. The worst fears of people around the world had come true; the Dictator of Syria, Bashar al-Assad, had attacked his own people with chemical weapons.

Within days of the attack, President Barack Obama declared that the world must punish Assad for his use of chemical warfare, and that the United States would do so with military force. With approval from Congress, the United States will use fighter jets and bombers to attack Syria. This attack would target many parts of the Syrian military, potentially doing enough damage to help Syrian rebels win the civil war against Assad. However, if the United States does attack Syria, it may do more harm than good.

When the Syrian Civil War began in 2011, one of the main concerns was that the Syrian government had a large amount of chemical weapons. In the months following the start of the war, President Obama spoke on national television declaring that the United States would not get involved. However, Obama warned that there would be a red line that if crossed, would force him to attack Assad’s army. This red line was the use of chemical weapons. Now that the line has been crossed, Barack Obama has put himself in a tough situation.

When Obama warned Assad not to use chemical weapons, the President had hoped that Assad would listen. Since Assad didn’t, Obama has decided to attack Syria. If he doesn’t, the United States’ rivals such as Iran and North Korea will view the United States as weak because it can’t back up its threats. However, if Obama does attack Syria, the world might become an even more dangerous place.

As of right now, Assad is winning the Civil War, which means the war will soon end and Syrians will stop dying. If the U.S. attacks Assad, then the rebels will rebound, which would drag out the war leading to the death of more Syrians. If this happens, Syria will be completely destroyed and run by different rebel groups. Roads, schools and hospitals will lay in ruin. This would create a poor and chaotic Syria, where terrorists can hide and learn how to fight (the same thing happened in Afghanistan 20 years ago; 9/11 was 12 years ago.) On top of this, having an unstable Syria means its neighbors, such as Iraq, risk becoming unstable too. Not to mention a U.S. attack would make Iran more determined to build a nuclear bomb, putting Israel in a vulnerable position.

Obama has left himself very few options. Either attack Syria and make things worse throughout the Middle East or not attack and look weak to America’s enemies.  It may be in the support of a tyrannical dictator who kills his own people, but in the end, a dictator who prevents his country from collapsing into chaos is better than the whole region spiraling out of control. Now, the U.S. has to ask itself which outcome hurts America more? 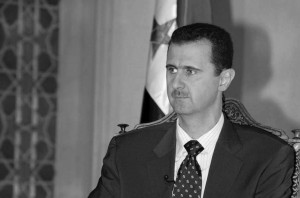