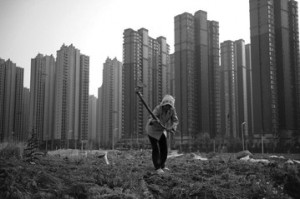 China’s move to urbanize the country-side has done a lot more damage than the country anticipated. According to The New York Times, around 40 people in China over the past five years have committed self-immolation in protest to their eviction. Residents are refusing to leave their homes while they are being demolished. Evictions aren’t necessarily announced prior to the government’s enforcement, so many residents are unprepared for the evictions. These people are all farmers who are forced to leave the land they own so the government can use it to build business and apartments.
One case of self-immolation involved a woman named Tang Huiqing, who was feeding her grandchild when demolition men surrounded her sister’s workshop. Their family members came to try and save the shop, which resulted in a fight where one family member suffered a broken rib. Huiqing’s sister ran up to the roof of her shop and watched the fighting take place. While on the roof, she begged for them to stop the fighting and for negotiations. When no one listened to her, she set herself on fire. Her shop was torn down a few days later and her family was only given money for injures they received during the altercation.
Suicide has been a form of protest in China for hundreds of years. Now the Chinese people are using it as a way to bring awareness to what is happening to them and their land. The suicide of people in protest of the evictions has caught the attention of the government.
The number of suicide cases has made the government rethink the fast change into urbanizing the countryside. Some government officials like Li Chuncheng have been replaced mainly because of the methods he used to take land from the landowners. Huiquing stated in an interview with The New York Times that “My sister’s sacrifice brought a change. Right now they don’t dare tear down so many homes. There’s more consultation. At least here, they don’t tear down as much. Maybe in this village it’s better.” The hope for many of these landowners is that it will be better in their villages and no more people will have to lose their lives for this cause.
By 2025, China plans on moving 250 million people from rural areas into cities. In a small village called Zhuguosi, the residents have decided to form a human ring around the town to stop their land from being destroyed. The village is supposed to be torn down to create Chengdu’s New Financial City. The villagers have been in dispute with the police since 2010 over this charged issue. In an interview with the The New York Times, a 31 year old villager from Zbuguosi stated, “If we don’t oppose this, then we don’t have anything.” The government has offered all the people money for their land, but some never get compensated and if they do, the money is nowhere close to the value of the land.