“Insidious: Chapter Two” picks up right where the first one left us all hanging. It is a direct continuation, jumping right into the investigation of the eerie murder of medium Elise Rainier (played by Lin Shaye). The investigation goes in favor of the Lambert family, but then everything else that could possibly go wrong does exactly that.

Just like “Insidious,” “Chapter Two” includes those old fashioned, creepy entities that come at you out of nowhere. Victorian dresses, powdered faces and bloodthirsty teeth leave you feeling uneasy even through a big screen. The infamous bride in black is the focus of the second film, and since medium Elise Rainier is now gone, the family turns to an old helping hand—retired psychic Carl (played by Steve Coulter). Josh Lambert is of course lost in “The Further,” as the first movie left us off with, and Carl and the rest of the Lambert family fights the evil entities to get their father and husband back from the evils holding him there. 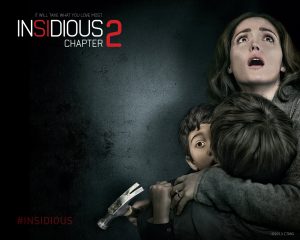 “Chapter Two” mostly occurs in the home of the grandmother, and where Josh Lambert grew up and experienced his time in “The Further” as a child. The house has a grand piano, which mysteriously plays on its own, and some children’s toys that set off wife and mother Renai, convinced they have to leave the house because the hauntings are happening yet again. The film flashes back to the first and ties the two together in ways that would not be possible without the flashbacks, showing a dual perspective for several of the characters.

The film also takes us to the former home of medium Elise Rainier, by her two quirky helpers Spec and Tucker, who yet again give us some comedic relief when the film builds up the tension, similar to the way the first film did. We also get to see the home of one of the most powerful entities where we see an abundance of corpses, disturbing dolls and rocking horses that sway by themselves.

The first chapter of “Insidious” featured a disturbingly happy soundtrack, with songs such as Tiny Tim’s “Tiptoe Through The Tulips.” Also there were seemingly happy entities that danced along to the songs. “Chapter Two” had a less creepy soundtrack to go along with it, but does feature the song written by the character Renai.

Director James Wan has made his mark in the horror-movie genre. Wan directed this past summer’s sensation, “The Conjuring,” and also the classics “Saw” and “Saw III.” So it is no surprise that “Insidious: Chapter Two” will send chills down the audiences’ backs. Sophomore Anthony Nieto had high expectations of the sequel and it did not disappoint, “I was afraid that “Chapter Two” wouldn’t be as thrilling and scare me as much, but it was definitely just as intense and just as good a story as the first one.”

This sequel is a direct continuation and answers all of the questions the original left off with. Unlike other horror movie sequels that use the same storyline as the second film and throw in new characters, we see the same family and get to know them and their story even better. “Chapter Two” premiered on Friday the thirteenth, just in time for the fall season that is meant for chills and thrills.