Recently, the media has been completely absorbed in one news story that can’t escape the limelight: Miley Cyrus. The childhood  star “Hannah Montana” has been making front-page news, like never before and baring more skin than ever. The Disney protégé has debuted a new single “Wrecking Ball” that has drawn attention to herself, her ever-changing appearance and her “all grown up” aura. Personally, I am a Cyrus fan and whenever she’s being singled out all I can think of saying is “you do you, Miley.” Most fans, however, wouldn’t agree.

I understand that posing naked on a demolition ball in the music video may not be the best form of publicity, but what’s the big deal? Is it really the craziest stunt Hollywood has witnessed? Of course not.  The hate mail and comments on social media websites have been so substantial that Cyrus herself had to post a statement explaining the inspiration behind the video, “If people get past the point that I’m naked and you actually look at me you can tell that I actually look more broken than even the song sounds. The song is a pop ballad. It’s one of these songs that everyone is going to relate to, everyone has felt that feeling at one point.” Does this statement sound “slutty” or “inappropriate?” No. It appears raw, honest and human.

As young adults, a majority of us can say that we have felt this way. We may not be licking hammers and straddling wrecking balls, all while naked, but we have found ourselves sitting in bed fully engorged in Ben & Jerry’s “half baked,” hitting bottom—literally. Most of those evenings result in listening to John Mayer’s “Battle Studies” album on repeat, submerged in the depressing ballads feeling the pang of emotional crashing. Only we’re not actually crashing into walls and buildings, naked, or I would hope not. So, why the craze over this once popular child star?

Recent media has taken a special interest in the lives of celebrities struggling with the troubles of coming of age. Cyrus happens to be a normal twenty year old who is just trying to discover herself, not to fill the mold Disney has tried to bend her into. Adolescents all go through phases to try to narrow down their own distinctive traits and Cyrus is discovering hers now. “I’m just having fun, and whatever people label it as, it doesn’t really matter, I’m just having fun,” said Cyrus when interviewed by Entertainment Weekly.

I understand the parental concern about children looking up to Cyrus as a role model. However, that could go for any celebrity or fictional character. I believe that parents have the ability to censor their child’s exposure to the media.If they believe it is necessary, then they should take accountability for that, not be concerned about others’ irrelevant actions.

Next time there’s a Hollywood “scandal” just remember, celebrities are all people, experiencing life just as we are. Some days are good and some days are wrecking ball bad, and their ways of expression do not deserve to be judged. 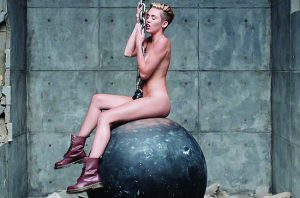