With the 2013 college football season already in full swing, it is time to look at the top candidates in contention to win the elusive Heisman Trophy.

Teddy Bridgewater (QB Louisville): Bridgewater is one of, if not the best passer in college football. The junior quarterback has started off the 2013 season with a bang. He posted nine touchdown passes for 752 yards and just one interception in the Cardinals first two games. Bridgewater is the most NFL-ready quarterback of this years Heisman bunch due to his tremendous pocket presence and his ability to throw accurately (he has a completion percentage of 76.7 percent through 2 games.) Louisville will enjoy a particularly easy schedule this season with the toughest matchups being against Rutgers and Cincinnati. If Bridgewater keeps up the numbers he has put up and leads his team to an undefeated season, he will be a shoe-in for the Heisman.

Johnny Manziel (QB Texas A&M): “Johnny Football” took the college football world by storm last season when he became the first freshman to win the Heisman. This season, Manziel looks to continue his electric style of play to win the award again. Despite being suspended for the first half of the season opener for disciplinary reasons, Manziel had a solid debut, throwing for three touchdowns. If he can have a big game against tough opponents like LSU, and lead his team to a BCS bowl, “Johnny Football” will become the first player to win the Heisman two years in a row since Ohio State running back Archie Griffin won in 1974 and 1975.

Tajh Boyd (QB Clemson): His stats through the first two games of the season may not be eye-popping, but Tajh Boyd has emerged as an early frontrunner to win the Heisman. The Tigers impressive win over then fifth ranked Georgia has boosted Boyd’s stock immensely and has put Clemson on the radar for a possible National Championship run. Boyd can make plays with his arm and his feet, but also has a lot of poise in the pocket. If he can lead the Tigers to wins against Florida State and South Carolina, while taking care of business against everyone else, Boyd will be in line to be a Heisman winner and maybe a National Champion.

Marcus Mariota (QB Oregon): The first two games of the 2013 season have been business as usual for the Ducks as they have scored 50 plus points in both games led by second-year quarterback Marcus Mariota. Mariota has made plays by both passing and running, including a 71-yard scramble for a touchdown against Virginia in Week 2. In his first two games, Mariota has topped 100 rushing yards and posted three scores on the ground. Make sure not to sleep on Marcus Mariota.

Todd Gurley (RB Georgia): While all signs point to a quarterback winning the Heisman for the fourth straight year, Todd Gurley has a legitimate shot at college football glory. Gurley has the ability to break a big play on every down due to his impressive speed for a 230-pounder. Even starting the season off against two top ten teams (Clemson and South Carolina) didn’t slow Gurley down as he put up at least 100 yards in both games. 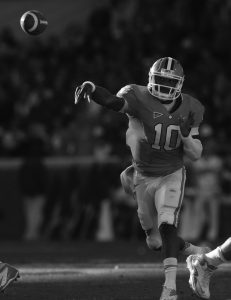