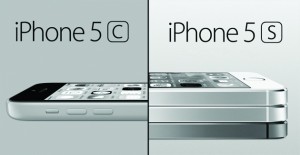 Every year, Apple excites the media and the public with the announcement that they will host an event to show or offer a new product. They are quiet, silent, in fact, about what the event will reveal, with no specific information about what is in store for the new iPhone.
Then the temperature drops a bit, and Apple unveils its latest innovation: a newer, more high-tech iPhone, something beyond our imagination– all on a device thinner than a deck of cards. They did it again. And the rewards doubled the expectations with two new surprises.
On September 10, 2013, Apple introduced not one, but two new iPhone devices accompanied by a brand new Operating System update, iOS7.
Quite simply, they introduced the iPhone 5c: a plastic-covered and boldly colored device for the younger, more whimsical user looking for a less expensive alternative to the previously high-priced products. Alternatively, the iPhone 5s is the newest, most powerful device for the “techies” and users looking for the most technologically advanced and refined products on the market.
Under the hood, the iPhone 5c is nothing new. Besides a somewhat expanded battery and a slightly improved front-facing camera, it is essentially the same as the iPhone 5.
What truly sets the iPhone 5c apart, however, is Apple’s return of undying devotion to design.  It’s plastic, as awell as colorful, with models in rose, blue, green, white, and yellow. It’s beautifully simple. With its flat back and shinier, smoother shape, it’s engineered to fit perfectly and feel good in your hand. With its lower price, starting at only $99 with a two year contract, more people will have the ability to feel the power of simplicity and seamlessness. It’s more than a physical device. It, in itself, is a mode of expression and an extension of the human experience. I believe the late Mr. Jobs would approve.
On the iPhone 5s, you find a more technologically significant and revolutionary change, especially with the fingerprint sensor. TouchID, as Apple calls it, can securely read the user’s fingerprint to unlock the phone and verify purchases in iTunes and the App Store. Although it is not the first device to introduce the ability to use fingerprint recognition, it will revolutionize it and make it an easily accessible feature for everyday use. As Ashkan Soltani, an independent technology researcher and consultant notes, “Apple tends to innovate and push features that other companies mimic, since they have so much influence. They often make tweaks and improve the usability.”
The other main developments accompanying the iPhone 5s model, starting at $199 for a 16gb model offered in gold, silver, and “space gray”, include an improved camera featuring a two-part flash that accounts for pictures both at night and during the day, and an improved battery life and processor. The processor, M7, allows certain features to be run solely on a different chip, saving battery life and allowing the device to run faster overall. Both new iPhones, as well as the older models of the iPhones, will be sporting Apple’s newest operating system iOS7.
As Jonathan Ive, Apple’s Senior Vice President of Design, explains, it is a complete overhaul of all the previous Apple software. It’s “completely new…yet instantly familiar to make it more useful, more enjoyable”. Its new structure aims to provide unity, simplicity and integration throughout the entire system.
Colorful and affordable for the everyday man and woman, the new apple products are technologically gratifying for “techies” as well.  As the season continues, apples will change color and drop from store shelves to match the season
The iOS7 will be available for download on September 18 and both new models of the iPhone will be available starting September 20.