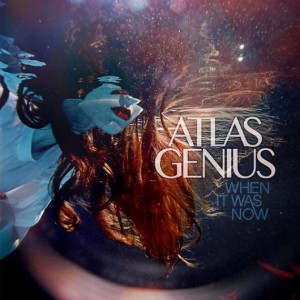 The Australian duo Atlas Genius never expected to get much out of their first single “Trojans” when they posted it online two years ago. But after being shared on iTunes and numerous music blogs, the song garnered a solid fan base wondering who this new band was. Now consisting of brothers Keith and Michael Jeffery, Atlas Genius instead decided to focus on school rather than write new music, and it wasn’t until a month after posting the track that they realized they’d received about 30 e-mail requests for meetings with different labels. They soon signed with Warner Bros. Records and released an EP in 2012 that included two new songs and “Trojans,” which was still continuing to grow in popularity.

Fitting nicely into the recent surge of synth heavy, alternative rock, the group proved they had talent beyond writing and playing as they recorded and produced the glossy tracks themselves. And their debut album “When It Was Now” follows the same 80s-inspired electro current—at times perhaps a little too closely. Yet, the record is entirely enjoyable, even if most of it isn’t as instantly memorable as their breakout hit.

Opening with the excellent “Electric,” the first half certainly lives up to the high potential that Atlas Genius promised. Including tracks like the inescapable “If So” that’s featured on the new FIFA ‘13 game and the smooth “Back Seat,” “When It Was Now” starts as a thoroughly engaging debut.

But as it moves along, the album’s second half falls victim to similar song structures and recycled ideas. Although none of them are necessarily weak, some songs just simply don’t stand out. “On a Day”’s electro groove is fun but gets overshadowed by the stock alt rock melody and vocals. Elsewhere, featuring hand-claps, glittery synths and pulsing keyboards, “Don’t Make a Scene” is great on its own but sounds like filler when played with the rest of the album.

While standouts like the new wavey highlight “Centred On You” and the breezy “All These Girls” work to keep the tone consistently intriguing, the second half is rarely able to match up to the first. Yet you can’t help but look past these modest faults of a group who constantly keep you entertained even when they lose your immediate attention.

It’s true, “When It Was Now” is nowhere near a perfect record, but it’s one to always have in your car for those especially sunny days. Even when they slow down on the stunning, acoustic guitar-based “Through the Glass,” there’s no question that they’re rightfully in the same musical vein as such essentials like Imagine Dragons and Phoenix.

Seeing their experimental “Trojans” climb to 45,000 downloads came as a shock to the then-unsigned Atlas Genius, as people were still recognizing the talent they had. And it’s a talent that will continue to grow with the bright future that the band’s debut is pointing to.