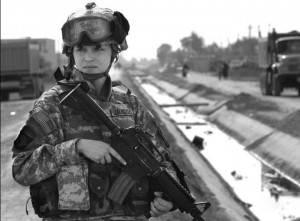 Since 1994, the Pentagon’s “Com- bat Exclusion Policy” has discrimi- nated against women who serve in America’s military. Defense Secre- tary Leon Panetta has removed the ban on women in combat, which has the potential to widely broaden opportunities. Panetta says, wom- en have become an integral part
revised. Some military officials have expressed an uncertainty regarding certain positions and the ability for most women to meet the physical requirements, such as infantry. By May 15, the military services must devise a plan for integrating women into jobs that exclude them.

Rape and sexual attacks from fellow members of the service are also a concern. Many cases go underreported but in 2011, almost 3,200 cases of sexual assault were recorded. There has been apprehension as to how more women in the military may
of the service fighting and dying alongside men and that the time has come to stop excluding women from combat positions. President Barack Obama says that the decision would “be another step toward fulfilling our nation’s founding ideals of fairness and equality.”

Previous guidelines regard- ing women in the services have kept nearly 200,000 positions out of reach for female soldiers, as well as hindered career ad- vancement. This historic decision has the possibility to change all that. However, women shouldn’t get too ahead of themselves yet. Pentagon offi- cials say it may be a year before women can begin applying for newly opened positions. Ac- cording to Panetta, the reason for this is due to a review peri- od to see if there are any posi- tions that should be excluded. The change will be implement- ed as “quickly as possible,” but the Pentagon is allowing until January 2016 for final decisions from the services. If a branch of the military decides that a specific job should not be opened to a woman, representatives of that branch will have to ask the defense secretary for an exception.

There are some concerns regarding what this may mean for the physical standards necessary. Some military officials pre- dict artillery and combat engineering to be the first units to admit women. However, other combat arms specialties could remain closed to women for longer periods. The difficulty lev- el and standard held for front-line positions may have to be lead to more cases of sexual as- sault. However, “allowing wom- en to get the benefits of serv- ing in combat positions won’t make that threat worse. In fact, it might make things better be- cause it will mean more women at the top of the military, and that, inevitably, will mean more attention to women’s issues,” says Gail Collins from The New York Times.

Some Marines expressed their thoughts and are still unsure on where they stand: “integrating women into the infantry is ask- ing to shift a cultural norm. It is not something that is impos- sible but it will take much effort and training to be successful. I, for one, am torn,” says a marine when asked his feelings on the issue.” Another marine felt this change might affect him men- tally and emotionally when in combat, “my dad taught me, as I’m sure other men were taught, to protect women when they are in harm’s way. Combat is harm’s way.”

Leon Panetta will be stepping down from his position as Secretary of Defense and returning to his family at home, after nearly 50 years. Within his time of serving the American people he says, “we have brought wars in Iraq and we will bring the war in Afghanistan to an honorable conclusion. We’ve opened up opportunities for all Americans to serve in our military, and we continue to strongly support our forces, their families, and our wounded warriors. These
are some of the achievement that is I am proud of.”