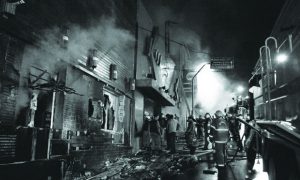 A fire at a nightclub in Santa Maria, Brazil left 250 people dead and several injured on Sunday night. The nightclub,
the full extent of the damage being caused by the fire and the massive stampede of thousands of people trying to leave the building through one door. More state authority personnel arrived later. This included Brazilian President Dilma Rousseff, who came for support and guidance.
According to CNN, since the night of the fire, police and investigators have found fake fire extinguishers, with expired fire and municipal licenses. It was also dis- covered later that the club’s sound insulation was made of styrofoam, which re- leases toxic fumes when burned.

The morning after, as the news reports started coming in and more bodies were being found and identified, the reality of what had happened started to sink in for the people of Santa Maria.Mariana Magalhaes, a 24-year-old survivor, was inter- viewed by Agencia Brasil, a news agency. When talking about the toxic fumes created by the styrofoam insulation, she said, “It was a very silent enemy. People were exiting fine and walking, when from one moment to the next they start- ed to fall, to have convulsions, to vomit.” Magalhaes and her five friends were able to escape quickly and without injury. But although she is thankful to be alive, she talked about the conflicting feelings she now has. She said, “You can count five people on one hand. We don’t feel fortunate for surviving because there are mothers who won’t be able to hug their sons. My mom is hugging me, but at the same time I felt lucky and guilty.”
Parents are grief-stricken and want answers. Elain Gonzales, a mother of two
called Kiss, was popular among young people who would often go there on the weekends. The club’s license, which was expired, was only supposed to allow up to 691 people in. However, the club was well over legal capacity when about 2,000 people flooded in that night to see the band Gurizada Fandangueira perform. The club also only had one avail- able exit, and as a result, most of those who died were trampled by people hurrying to get out.

Since the night of the fire, there have been multiple protests and debates as to who is responsible for the tragedy, and many have had to say goodbye as they bury their friends and family members. The police have since arrested the two owners of Kiss, who according to CNN, have been identified as Mauro Hoffman and Elissandro Spohr, the lead vocalist of the band and the show producer. The concert was only 20 minutes in when a lighting effect at the end of a song caused the ceiling to catch fire.

As people started panicking and running for the only available exit, (the front door) a firework went off. The firework was brought to the club with the band, who knew when they purchased it that it was only supposed to be used out- doors. According to CNN, Santa Maria police Marcelo Arigony has accused the band of purposely buying the firework made for outdoor use only, because it was cheaper.

People began charging into the streets as fire trucks and ambulances arrived. However, authorities didn’t understand
photo courtesy of the New York Times
sons, one of which died, was inter- viewed on a Brazilian television show. She said, “It’s terrible, very sad. My sons left the house looking nice, happy, playful, the two brothers together. My son left to go to a party and now here he is, inside a box. I demand justice.”

Brazil’s minister of health, Alexandre Padilha, has assessed the situation. Those with the most serious injuries have been relocated to hospitals in big- ger cities where they can be attended to for a variety of health issues, including permanent dialysis, a need for blood pressure medication and assistance breathing. With the authorities working together and the support of those affected by the tragedy, the community of Santa Maria is trying to help one another in a time of distress, and doing what they can to prevent this from happening again in the future.