For the women’s team, the Red Dragons now have a record of 7-6 in the SUNYAC standings. This was a pivotal win for a team that seems to be coming together at the right time. The Potsdam Bears have yet to win a SUNYAC game so the Lady Red Dragons had to make sure this wasn’t a “let down” game. When asked about the team’s mentality, head coach Daphne Thompson’s comments before the game showed that the team was in the right mindset: “Last year Potsdam beat us in a very similar situation and we know anyone can beat anybody on any given day. We still need to be ready to play. I believe this team has come a long way, our defense has been strong all season, but I am pleased with the improvement of the offense. We’ve had much more flow.”

The Lady Red Dragons never gave up the lead and routed Potsdam until the final whistle. Team leading scorer Kristen Pappalardo and freshman Bryn Loomis both led this game with nine points each and point guard Grace Schilling kept the offense very poised in the half court game with seven assists.

Defensively speaking, the Bears had no answer for the presence of Lady Red Dragon’s center Sarah Longto, who dominated the paint with three blocks and five rebounds. Rebecca Nelson also added eight rebounds to assert the defensive attitude.

With the win Coach Thompson must be pleased, but before the game she complained the team has had too many turnovers lately. The Lady Red Dragon’s had a total of 15 turnovers in the game, but it never seemed to have a bearing on the result of the game since it was so one-sided. Regardless, sloppy play with the ball can prove to be pivotal in big games down the road. This team has improved all season so with five games to go before the SUNYAC tournament, there’s always more room for a little more improvement. 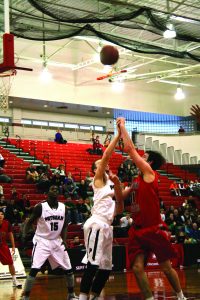 The men’s basketball game was an entertaining battle with a very heartbreaking result. The Red Dragon’s have had their fair share of struggles this season and now following this loss have a dismal record of 1-12 in the SUNYAC standings.
Dan Lee led the team with 19 points, shooting a phenomenal 7-10 from the field and 5-8 from behind the arc. The Red Dragon’s team leading scorer Zach Mager added 17 points, while Frankie Kelly and Jack Dignan led the team in assists with eight each.

Curtis Pierce, the leading scorer and rebounder for the Bears was a real headache for the Red Dragons. He led his team in this one in double-double fashion with 27 points and 13 rebounds. Starting point guard Joe Estramonte was a great on-the-court manager for the Bears, having no turnovers throughout the game and giving Pierce opportunities through the pick and roll game. The Red Dragon’s struggled defensively in the game’s final minutes, allowing this one to slip away. It didn’t help that the team was in foul trouble fairly early in the second half, causing the Red Dragon’s defense to be on their heels to avoid putting Potsdam to the line.

Going into this game, Head Coach Vince Medici preached to his team that it’s simply, “time to get a win.” Unfortunately the team hasn’t won a game since January 8 and the team has had problems with consistency.

“We can’t expect to score 90 points a game,” Coach Medici said before the game, “that’s just not the kind of team we are. Giving up 80 something points is not acceptable, we have to play harder defensively.”

The effort cannot be questioned for the Red Dragons, but with Potsdam playing without several of their starters, this loss is pretty bitter. This team is fairly undersized against most teams, but when focused, the defense can be quite good. Had it not been for a few melt downs in communication late in the game, the Red Dragon’s could have won this one.

The pride was there, but unfortunately the win was not. The Red Dragon’s will continue to fight with five games remaining in the regular season.