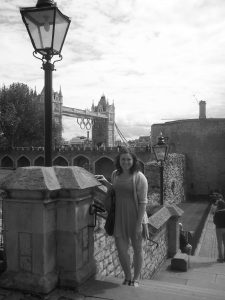 When I stepped off of the airplane in London, England, it hit me that I was all the way across the ocean from home. The whole experience expanded my comfort zone. Even though a large portion of the country speaks English, it was an entirely new culture to get accustomed to.

While in England, I took two classes at Kingston University, which is in zone six of London in a town called Surbiton. The classes both transferred over into general education classes at Oneonta which will help me graduate on time. My apartment was a 15 minute walk from campus and my friends and I walked to and from every day, which became our routine during the week. These classes were a great way to learn about London culture since some field trips consisted of visiting Oxford University (where many scenes of Harry Potter were filmed), Stonehenge, Bath and Hampton Court Palace. Every day I was immersed in British culture: partaking in “high tea,” eating fish and chips as well as visiting Buckingham Palace, Westminster Abbey, Trafalgar Square and Tower Bridge. If I wasn’t touring the many places on my list during the weekends, I was on trips to Paris, Dublin and parts of Wales, which were all equally amazing. While in London, I also decided to skip class one day to go see Rupert Grint (Ron Weasley) run with the Olympic torch at Middlesex University. This was an incredible time to be in London since all the Olympic activities were going on, and I definitely saw things I wouldn’t have originally seen. By the end of my trip, I was a pro at navigating the tube station, I had no use for the map I bought, and I no longer had to read the numbers on the coins to figure out how much each was worth.

When I left England I realized how comfortable I had become with being there. I highly recommend studying abroad somewhere that means something to you because it makes the trip so much more exciting and more memorable. I chose London because I am half British; I wanted to learn more about the culture, and partially because I love Harry Potter. I know for sure that I will go back to London one day since it is one of the most intriguing and exciting places to which I have ever traveled to.