Editor’s Note: Mr. Touchette resides far outside of Oneonta, in Schoharie County. He phoned the Times in search of a paper that would publish his letter. We have little knowledge of the situation other than what he explains, but intend to support him in getting his story out. Below is the letter he wrote to Governor Cuomo in July.

Who do you have to bribe in New York State to have crimes investigated? I am not writing about small crimes, I am writing about the theft of my 190-acre farm. If you think a farm can’t be stolen I can prove you wrong, and in my case that law doesn’t care.

I am not going to mention any names or the county where this happened to protect the newspaper from possible libel. Talk to me or ask for my documents and I will give you the whole story. I am not afraid of libel charges because this is true and if I were to be sued successfully and I was taken for everything that I owned they would get nothing. They have already stolen everything that I own including my personal possessions.

I believe I have been to every level of law enforcement in the country and I get excuses for why no one can investigate my charges.

I signed three contracts to sell my farm so I would not walk away with nothing, but the first and the third contracts were written to not work and my lawyers could not figure this out. I did figure it out and I have no legal training and had never been involved in a real estate contract before the first contract was signed. The second contract was meant to be a complete fraud but they made a mistake. The contract is valid, and I proved it, but the district attorney in that county said in my case fraud would not rise to the level of a crime. But since fraud is a crime, that would mean in my case a crime would not rise to the level of a crime.

Fortunately for the lawyers who represented me in the first and second contracts, the district attorney of that county was a partner in the same law firm before he was elected. It must be nice to have friends in high places. I wouldn’t know.

You can forget all of the lawyer jokes that you have ever heard. I can’t find a lawyer who will sue anybody for anything. I have heard every excuse that can be made why they will not represent me. Even in the case of the second contract for $1,000,000 that is valid. I guess lawyers don’t like money. I don’t understand why they so compassionately advertise that they will get you every penny that you rightfully deserve for being wronged (minus their 33.3 percent cut).

I have a story if anybody wants it. I am willing to name every name and I can document it all. Don’t think this could not happen to you. I would not have believed it either but I have lived it and am enduring the results.

Some people are above the law and are bold enough to flaunt it. 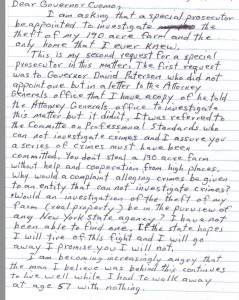 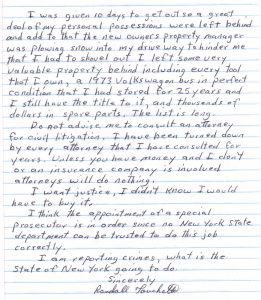