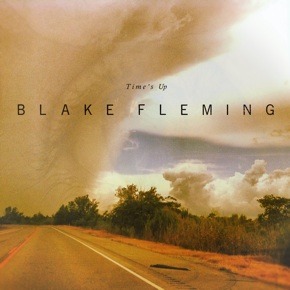 This September, drummer Blake Fleming, currently an adjunct professor in SUNY Oneonta’s Music Department, released his debut solo album, “Time’s Up.” This album is described by both its creator and critics as a percussion odyssey, and consists of eight individual tracks featuring only drum and percussion instrumentation. The album was released online for free download on Bandcamp.com on September 12, in conjunction with a Kickstarter campaign to raise funds for vinyl pressings of the record.

The album is true to its description, with each track producing a level of rhythmic complexity you won’t find on many popular music recordings, let alone more technically demanding jazz records. It stands out at face value, being that it’s a solo drum and percussion album, but also because each rhythmic invention will knock you on your back. The introductory track, “Intro/Mi casa su casa you kassa” opens with sounds of birds chirping, setting the soundstage for a tribal yet street beat. Fleming says he takes inspiration from his environment, whether that’s upstate in the “middle of the sticks or the middle of New York City.” He doesn’t care for the level in between, or the in between of anything for that matter. He also is strongly influenced by African field recordings, and among numerous other inspirations, draws from percussionist Mickey Hart’s “Apocalypse Now Sessions” and “Diga,” an album Hart recorded in the 70s with the Diga Rhythm Band.

Out of the eight tracks, each has its own strength and contains multiple layers. You’ll hear pitched cowbells, Fleming speaking a rhythm before playing it, and overall primal, visceral sounding drums that give the instrument a unique vivacity. Fleming gave a performance this past Friday at Main View Gallery on Main Street, Oneonta, and opened his set by approaching the drums like a curious animal sniffing out a lunar landing. His intent is to always create music with the same sense of newfound discovery. He sees the drum kit as an orchestra with endless sonic potential, and “Time’s Up” effectively illustrates this perspective.

“Time’s Up” was recorded in the basement of an old church near Fleming’s home in upstate New York, which serves as his practice space. Using basic recording equipment, he recorded each track on his own, occasionally using the sanctuary upstairs to do overdubs. “I’m very meticulous about mic placement. …I could just walk around with my headphones on, moving microphones and hitting things until I got the exact sound that I wanted,” says Fleming. Fellow SUCO instructor Andris Balins took the material from Fleming’s recordings and produced it to turn “a home recording into a really professional sounding recording,” but according to Fleming, “there wasn’t a lot of dressing he had to do for the sounds; the raw material I gave him was very strong.”

Fleming started formal lessons at age eight. Soon following, he joined a local colonial fifing and drumming corps, which had him touring the Midwest and east coast semi-professionally over the summer between ages nine and 12. At age 15 Fleming co-founded the Dazzling Killmen, a three-piece math rock act known for their 1994 LP “Face of Collapse,” which was named the “number one heavy record of the decade” by Alternative Press Magazine. The Killmen recorded a few singles with producer Steve Albini before being picked up by Skin Graft Records, a subsidiary of Touch and Go Records, but later disbanded in ‘95.

Fleming is also known for his contributions in noise rock groups Zeni Geva and Laddio Bolocko, along with co-founding the Mars Volta, the latter lending to the most widespread reputation of his musical fame. He’s been giving drum lessons since age 14, but only began teaching in an academic setting in the fall of 2008. His most recent project before “Time’s Up” has been Future By Now, the electroacoustic experimental duo of Fleming and Balins.

It’s unpredictable what Fleming could come out with next, given the range of innovation in his past work. Visit http://blakefleming.bandcamp.com/ to download the album or to contact Fleming about obtaining your own copy of “Time’s Up” on vinyl, which should be available in late December.