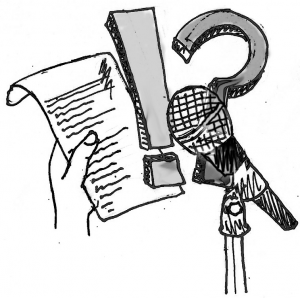 The microphone is on, the lights are up, and emotions are brewing. Wednesday night, September 5, the crowd, full of participants and observers, sat patiently waiting for the slam to begin. The lineup was just about full with nine participants, but the judges needed ten slammers. Ni-Emah Bugg was the first person to eagerly shoot her hand up to volunteer, and ironically, as the order was chosen randomly, she was picked to go first. Following the warm up performance, Bugg, the singer, songwriter and poet, set the bar high for her competitors, showing raw emotion and poetic rhythm.

Along with the four students at the official judges table, random audience members were asked to hold up numbers to give a crowd opinion at the end of each performance. These spectator judges did not know any of the slammers and remained completely unbiased throughout the competition. Our host for the night encouraged the crowd and poets by telling them it was the audiences job to sway these judges, “who knew nothing,” by cheering.

As the poets continued to take their place on stage, many different themes were thrown at the audience. From heartbreak to economic problems, racial barriers, and even sex, the slammers kept it fresh and showed passion, emotion and even comedy.

Along with booing, when the challengers received low scores, audience members also yelled out things such as, “They didn’t get it!” When the poets hit high points in their performances, the listeners would signal their appreciation by snapping their fingers or with their approving body language.

The comedic performances of the night, including Michael Bonanni, Dylan Bressler, and Brian Reeves, commanded the audience’s attention. These slammers received laughs and looks of shock, but also of acceptance. Reeves’s reading particularly stood out as one of the more comedic performances, using a funny voice and referencing Dr. Seuss while repeatedly asking the question “Do you want to have sex with me?”

As the judges tallied up the scores for the night, the audience was lucky enough to hear a number of poems from the feature performer, Jive Poetic. He has represented the United States in five different countries in slamming competitions, and when he is not on tour, he graces such schools as Oneonta with his stage presence. Jive Poetic kept the crowd interested throughout his whole performance. Many laughs were heard as he did impressions from Bill Cosby to Flavor Flav. However, laughter is not all he is capable of producing from an audience. Demonstrated through great talent and speed, Jive Poetic ended the show with a bang and performed a comedic, yet heartfelt poem about his mother.

Finally, it was time to choose a winner and the drum roll from the audience roared. Our stars of the night were announced, coming from both genres. Our first place winner was Elizabeth “Kinsey” Bobel scoring a 26.1; she shared a more serious slam about heartbreak and love. The second place winner, Michael Bonanni, scored a 25.6. He was chosen from the pool of comedians, performing a poem as Iron Man. Both Bobel and Bonanni will move on to the Grand Slam. Oneontans, you are all encouraged to come out on September 19 to enjoy the next big slam and display your skills, or simply enjoy the show.