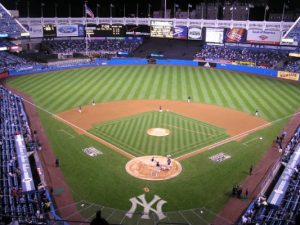 Wrigley Field, which began hosting Chicago Cubs games in 1916, currently stands as the second oldest stadium in Major League Baseball behind Boston’s Fenway Park. Wrigley Field is nicknamed “The Friendly Confines,” an expression coined by widely popular “Mr. Cub.” Hall of Famer Ernie Banks. The friendly confines of Wrigley has seen many historic moments such as: Babe Ruth’s called shot in the 1932 world series, Pete Rose’s 4,191 hit which tied him for the most hit of all time in 1985, Kerry Wood’s 20 strikeout game in 1998, Sammy Sosa’s 60 home runs in 1998, 1999 and 2001 and the home of three all-star games. Wrigley Field also has the ivy-covered fences and a vintage look with the scoreboard numbers being changed by hand. Unfortunately, Wrigley Field has never seen the Cubs win a World Series , since their championship drought dated back to 1908. Wrigley is distinctly recognizable for its ivy covered brick outfield wall, the typical wind patterns off of Lake Michigan, the symbolic red marquee over the main entrance, the hand turned scoreboard and for being the last Major League park to have lights installed for night games, which didn’t take place until 1988.

The Boston Red Sox’s Fenway Park is the oldest big league stadium, opening its doors in 1912 and just recently celebrated its 100-year anniversary. Since opening, this stadium has seen the Red Sox survive the “Curse of the Bambino,” which occured as an 86 year championship drought after the franchise gave away Babe Ruth to the rival Yankees.

Due to its age, Fenway is immersed in tradition and walking through its tunnels; and sitting in its green bleachers are like looking back in time. The field of Fenway Park has an oddly shaped triangular outfield in center that is unique to this park, with “The Green Monster” wall in left field and The Pesky Pole in right field, which is named after Johnny Pesky who played for the Red Sox from 1942-1952. Fenway Park has one of the smallest seating capacities in the major leagues, roughly 35,000—yet they continue to expand the seating and add on more spots for fans to enjoy a game. “Williamsburg” is the name for the bullpen area in front of the right-center field bleachers and at the time it was built it was supposed to help Ted Williams hit more homers in his home ballpark. The lone red seat in the right field bleachers signifies the longest home run ever hit in Fenway by Ted Williams in 1946, measured at 502 feet.

The final iconic structure that makes up the holy trinity of baseball’s landmark stadiums is the New York Yankees, Yankees’ stadium.

After recently opening its doors in 2009, Yankees Stadium, the house that George Steinbrenner built, is one of the “can’t miss” places to catch a baseball game. From monument park, to the iconic structure that resembles the House that Ruth Built, to the museum and the chance to see one of the best teams in baseball yearly. Even though this stadium only opened its doors a few years ago, it still has been the venue where the Yankee captured their 27th title, Derek Jeter recorded his 3,000 hit, and Alex Rodriguez became the youngest player ever to hit 600 home runs. Don’t miss the clash between two iconic franchises in the sport—the Red Sox and Yankees—a classic series that never disappoints. Let’s not forget the days of hearing “Enter Sandman” belllow as closer Mariano Rivera enters in the ninth inning for a save opportunity are numbered, so the sooner you catch a game here the better. Also, no team other than the New York Yankees can hold their own annual Old Timer’s Day gamewhere past legends come back to the stadium to be honored as Yankee greats.