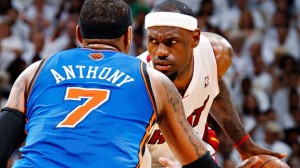 The chase for the Larry O’Brien trophy has commenced as the NBA playoffs kicked off this past weekend, with several story lines sure to keep fans filled with intrigue during the next two months.

After this year’s condensed schedule, in which teams played games closer together than ever before, these final two months are really going to separate the contenders from the pretenders.

In the western conference the usual suspects are in contention again, like the Spurs who are going for their fifth title since 1999, the Lakers and Kobe Bryant who are looking to get back to the promise land after a disappointing finish to their title defense last season, as they were swept by the eventual champion Dallas Mavericks. The Thunder, who were favorites in the West all season long, are a young but talented team poised to win it all. The reigning champions, Mavericks struggled often times this season but are dangerous and will not relinquish their title without a fight. The west also features two dark horse teams, the Grizzles and the Clippers; both teams have made big strides in the past year and it would not shock anyone if they made a run to the finals.

On the other side of the bracket, in the eastern conference, last season’s two main title contenders, the Bulls and Heat have returned stronger from last year’s disappointing results and look forward to redeeming themselves. Lebron James is still seeking to win his first championship after being highly criticized for his performance in the finals last year. The Bulls are looking to get to the finals for the first time since Michael Jordan led the franchise in 1998, but will have to do so without reigning MVP Derrick Rose. The Celtics get older every year but the big three along with Rajon Rondo have them in contention once again, while the Knicks big three of Amar’e Stoudemire, Carmelo Anthony and Tyson Chandler look to prove that New York basketball is truly back.

The NBA playoffs are filled with 40 days and 40 nights of memorable moments that are created and this year looks to be no different. Come mid-June, this year’s champion will be added to the history books and one team will hoist the O’Brien trophy but the question is, who will it be?