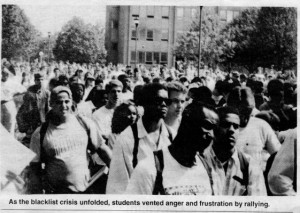 SUNY Oneonta’s Celebration of Change, and a Reminder of the Work (and Healing) that is Yet to Come

Close your eyes — and imagine a languorous day in which you were doing some spring cleaning, playing a video game or just listening to some tunes. Now picture getting a sudden knock at the door that wasn’t very routine. Unconsciously opening the door, you are confronted by members of the Oneonta police department who demand that you come with them.

You may ask to yourself “what kind of event would lead to such a thing to happen?”
On September 4, 1992, a dark cloud was cast over the history of SUNY Oneonta. On that date, the college gave a list that contained information about all of its enrolled male African-American and Latino students, including the name of each individual, to the New York State Police. Law enforcement was seeking suspects as part of a criminal investigation in the City of Oneonta, after an elderly caucasian woman claimed she saw a “dark figure and a black hand” who attempted to rob her home. Based on the robber’s quick movements, the woman also believed that the man had been young, so students of color at Oneonta were profiled and investigated.

As a result of the information leak, outrage spread quickly throughout campus and beyond. The event, which was eventually dubbed the “Black List,” drew national attention as it raised civil rights, racial profiling and privacy issues. As President Dr. Nancy Kleniewski stated in an e-mail on March 28: “The Black List represents SUNY Oneonta’s low point, reverberating even now as we continue to address issues related to campus climate. And while the institution affirmed our shared commitment to equity and inclusion in 2010 by incorporating diversity as a pillar of the strategic plan, we shall never forget the events of September 4, 1992, and their impact on our college.”

To commemorate the 20th anniversary of the Black List, Dr. Kleniewski has invited a group of faculty, staff, students and community members to initiate planning for a commemoration to be held on September 4, 2012. Among the activities this group she hopes will develop, are:
– A viewing and panel discussion of the “Blacklist” video by alumnus Sean Gallagher
– Recollections of those who remember the Black List
– An exhibit of related artifacts
– Reflections on how the college has changed since 1992
– Continuing discussion about our campus today, initiatives now underway and future opportunities to make it more welcoming and inclusive.
“The September 4 Commemoration Committee will have a budget sufficient to fund speakers, performers, research, and other efforts necessary to prepare for the event, which will guide our campus in looking back and moving forward,” Dr. Kleniewski stated.

Since the screening of Sean Gallagher’s documentary on the Black List last semester, there has been much outcry by the multicultural community over the perceived inadequacy of the college’s attempts to promote diversity and multiculturalism. The State Times had a chance to speak with Gallagher about his documentary and the significance of his work in Oneonta State’s contemporary climate. Here are some of the highlights from our interview:
ST: What was your motivation for creating the film?
SG: The first/original version of the film was made for a Documentary Studies class I was taking. I created it along with two fellow classmates, Dan Stalter and Yasir Ansari.
I never was fully satisfied with that version of the film as I didn’t have the opportunity to interview any of the students who were affected by the incident. So after graduating, I knew I wanted to revisit the project but I wanted to wait till I would be able to fully dedicate myself to it. For the past two years, I’ve been working on the full-length documentary of The Black List. I’m completely done with interviews and am now moving into post-production.
ST:What was the initial reception of the production, while being created and after it was completed?
SG:We had a screening for the film in 2008 that was supposed to be held in the Red Dragon Theatre. So many people showed up they ended up having to quickly move it up to the Hunt Union Ballroom just to make sure everyone could see it. That was a great feeling to see students finally hearing about the story as it had been completely swept under the rug at the time.
Teachers were also hugely supportive, especially Kathleen O’Mara, Caridad Souza-Watkins and the amazing educators of the Africana and Latino Studies Department.
Administration was silent, ignoring the issue at hand… as they had been until the Committee for Social Justice started addressing diversity concerns on campus this past year.
ST: Are you involved in the events planned for September 4?
SG: I sent a message to Dr. Kleniewski and the co-chairs applauding the announcement of the event and offering my help with developing the event. Dr. Kleniewski has responded thanking me for reaching out. I still haven’t heard from the co-chairs, so the ball is in their court. As I am fully immersed in the topic, have boxes of archival material and have contact with many of the former students affected by the incident – I’d say it would only be beneficial for them to ask me for my input.
Also to point out, I’ve spoken to a few of the Brothers of the Black List since the announcement and there is definitely excitement that the school is acknowledging what was done. I wouldn’t say it’s closure but it’s definitely a step in the right direction. I hope a bunch of them make it out to the event.
ST: What do you think is most important about the event?
SG: The most important thing about this event is for it to honor the Brothers of the Black List. A lot of young men who are now adults, most with with families and careers, are still impacted by The Black List and it will always be with them.
So I hope the September 4 Commemoration Committee puts a focus on the positivity of how the student body came together and took a stand. The student body rallied together in the quad right outside Netzer so I strongly feel that the event should be held right there in the same spot where students came together 20 years ago.
This shouldn’t just be an event to acknowledge that a wrong had been done. It should be embraced as a safe space to encourage open dialogue and conversation that communities like Oneonta are in dire need of. To me, that would be the best way for us to show our respect to the Brothers of the Black List.