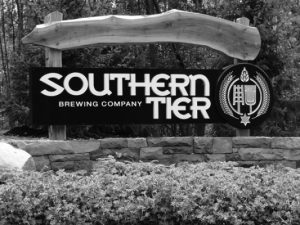 It’s unavoidable: with the first snowfall behind us, winter is undoubtedly on its bleak and blustery way. What better time to continue our exploration of dark beer than on the brink of an upstate cold season?

Southern Tier Brewery of Chautauqua County is better known for their wide selection of pale ales than for their heavier fare. Nevertheless, this Western New York brewery touts a slew of seasonal stouts and a year-round porters to boot. The latter is the subject of this week’s tasting.

At 5.8 ABV, Southern Tier’s porter is not especially strong in consideration of its peers. In fact, the porter is one of Southern Tier’s least alcoholic brews: the company’s crafts often edge into wine territory at well above 10%. The porter, then, is more or less a session beer.

Although Southern Tier’s porter pours black, its body isn’t particularly thick. A thin, tan head and a resoundingly smoky character accompany the brew’s notable carbonation. Discernable in its aroma are notes of coffee and chocolate, but these are overpowered largely by a fireplace-smokiness ideal for Oneonta weather. This overt scent translates to the taste, which is foremost, but not overpoweringly sweet, with coffee, chocolate, and caramel notes. The beer’s body is smooth but no thicker than what one would expect from a hearty brown ale. The porter’s finish expounds on a slight hop sourness first noticeable in its initial undertones.

Despite this porter’s low ABV and a body that is significantly thinner than, say, its counterpart by Anchor Brewing Company’s, this is a hearty session beer well suited for cold weather. Leave it to a Western New York brewery to know how to make a session porter fit for a Great Lakes blizzard. As beer expert August Johnson always says “this is the kind of beer you could serve your father.”