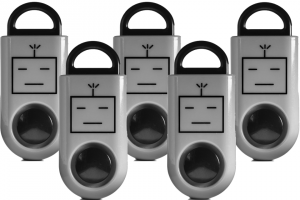 Campus safety is a nationwide concern, and thanks to the ROBOCOPP sound grenade, fight or flight are no longer the only options for responding to an altercation. Instead, the victim could make the offender run away – no violence needed!

Kristie R. Blevins, associate professor of Criminal Justice and Police Studies at Eastern Kentucky University, surveyed over 400 career burglars, 83 percent of which said that they would look for an alarm before attempting a burglary. Personal alarms can deter 97 percent of would-be attackers, according to the Home Office of the British government.

ROBOCOPP is a durable, portable device that is about the size of a flash drive and has a 120-decibal siren. The sound travels about 300 feet, almost the length of a football field, but this can vary depending on the surrounding topography. While screaming also creates a loud enough noise to draw attention, criminals and witnesses alike are drastically less likely to respond to yelling than an alarm.

Sam Mansen, co-founder and CEO of ROBOCOPP, explained that sirens have “more of an impact on the criminal psyche than a scream.” This is because yelling, unlike an alarm, does not always indicate an emergency so bystanders are unsure how to react.

Mansen first got the idea for his product when his sister went to college in the Bay Area and told him that she sometimes felt unsafe. He looked online for something that she could use to defend herself. Pepper spray remains a popular option, but most consumers are not trained in how to use this weapon. It is banned in many places including some college campuses, and most would rather avoid a confrontation than contribute violence to it.

Mansen realized that there was a need to be fulfilled. After creating a prototype, he gave one to his sister and some of her friends. Now, he’s been travelling to numerous college campuses offering a one-hour safety workshop to students that gives them tips on how to avoid and handle an attack.

For example, Mansen warns against making a call or pretending to be on the phone while walking alone. Most are guilty of thinking that an offender would avoid an individual who has someone on the line who would report having heard a confrontation. However, this scenario usually has the opposite effect because people that are on their phone look distracted and disconnected from their surroundings; therefore, they are easy targets.

By looking confident and speaking loudly, one emphasizes that they would put up a tough fight, which is something an attacker wants to avoid. Mansen referred to this as the Body Voice Response (BVR) technique. Everyone always has their body and voice with them and, with the ROBOCOPP on hand, they would always have a response prepared as well.

“The name comes from a long term vision of a utopia where there’s no incentive to commit crime anymore and the crime rate goes down to zero. That’s a motivating vision for us and I think that it’s not too far in the future,” Mansen explained.

ROBOCOPP doesn’t just prevent crime though. This device can also deter wildlife without hurting the animal. Gary D. Miller, researcher from the zoology department of the University of Montana, researched bear repellents, recording that 81 percent of bears were repelled by a horn. Mansen also told the story of a man in Idaho who suffered a stroke while riding his bike and fell at the side of the road. Unable to move or speak, it was hours until a dog drew attention to him. An alarm would have alerted passersbys that he was in need of help.

“There’s a lot of power in acoustics,” said Mansen. “Even if there’s a five percent chance of encountering a coyote while hiking, why not have that insurance policy?”