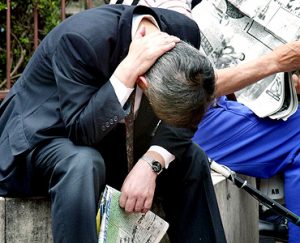 By college, most people have learned the definition of stress. As if classes are not enough, students also have to balance a much-needed social life with the stresses of preparing for the “real world.” All of the things that make up college life are enough to make anybody’s head spin. Unfortunately, the stress does not subside as students move from college to the workforce. In fact, governments are beginning to worry about the stress level of workers, which can be measured by their workload and the minimal vacation days they are taking.
In Japan, lawmakers are looking into a new law that would force workers to take a week of paid vacation time. While companies in Japan are required to offer a minimum of 10 days paid vacation time for their workers, Japanese employees usually do not take even the minimum number of days they can. Workers in Japan feel great pressure to work overtime and give up their annual paid leave, because societal norms push extreme loyalty to companies. Workers argue that even if they could take a day off, they would not want to because many of their co-workers are not taking vacation time. Employees do not want to seem like they are less committed to work than their peers. The Japanese Government reports that 22 percent of employees work more than 49 hours a week. This, as The Guardian reports, is “compared with the 16 percent of US workers and 11 percent in France and Germany.” Even though this is a big issue in Japan, they are not the only country that must deal with the problem of over-worked employees.
The problem of over-worked employees is felt in western countries as well as those in the east. The United States is the only advanced country that does not require businesses to give their employees paid annual leave. Japan and Canada require that employees be given 10 days off, Australia and Germany require that employees are given twenty days off and the U.K. gives their employees 28 days off. While the United States does not federally give their employees paid days off, many high paid employees do receive annual leave from their jobs. But according to Forbes Magazine, only 49 percent of low-wage workers and 35 percent of part-time workers get paid vacation time. Of those that do receive days off only 51 percent of workers use them, according to Market Watch, and 61 percent of those who do use their vacation days work while they are on vacation.
Why are people so reluctant to take the days that are given to them?
In a Harris Interactive Survey reported by Market Watch, it was found that “one-third of the 1,000-plus respondents say they cannot afford to take their time, 40 percent fear returning to a mountain of work and 35 percent believe no one else can do their work.” Workers are actually afraid to take their vacation days, they feel that taking time off would be detrimental to their ability to get their work done, to get promotions or be in good standings with the higher ups. Workers are actually giving up their paid vacation days and taking on more health problems.
Stress can effect every part of the body. A body under stress can cause muscle tension, long-term heart problems and gastrointestinal and reproduction issues. This is not ideal when talking about production and what is wanted in a worker. The Guardian reports that around “200 people die of heart attacks, strokes and other koroshi [deaths caused by overworking] events brought on by punishing work schedules” in Japan each year. Japanese employees are under so much stress, they are getting sick. In the case of one restaurant chain manager, some are even committing suicide from the pressures. According to Forbes Magazine, “job-related stress contributes to absenteeism, lost productivity, and health issues, and these factors cost businesses approximately $344 billion annually.” It behooves companies to ensure that their employees are taking their days off.
Taking vacations allow workers to become more relaxed and refreshed, increasing their productivity and their worker satisfaction. Maybe it would be beneficial for the United States to take a page out of Japan’s book and require that people take a week off from their busy lives and learn to relax a little more.