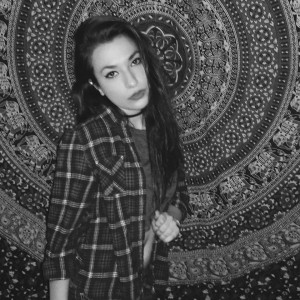 Recently I got to spend some time talking with one of my good friends Zena Ballas about her Facebook page, Humans of SUCO. This past fall we discussed the idea and both thought it would be a big hit for the campus. I was lucky enough to be the first person she photographed. Since starting Humans of SUCO in the late fall, Zena has compiled over thirty photos of students all around the campus, each sharing a bit of wisdom or something about themselves. I conducted an interview with her to see how the page was going.

Aaron Kreiver: Zena, you are the President of the Photography Club and you also started the Humans of SUCO Facebook page. When did you first decide that SUCO would be worthy of its own “Humans of” page?

Zena Ballas: Well, I saw Humans of New York when it was first created. I was really inspired by it, and I had already had that idea in mind on my own. I didn’t realize that Humans of New York existed, and when I saw it, it was really awesome. I was trying to build the Photography Club, and I really needed more members. Nobody really knew about the Photo Club. At first I was going to start the page myself, but I realized that it could be something that the Photography Club could work on. If we created this, it would bring our community together. There’s a bit of separation on this campus and it would put things in perspective for everyone.

AK: Do you run the page yourself, or does everyone in the Photography Club contribute his or her own part?

ZB: I’m running it myself, but they contribute by sending me photos that they have taken, and I’ll post for the page.

ZB: Yeah, and I’ll tell them to send me the photos with the quotes, and then I’ll review it and post it. I usually don’t have to review [or edit] anything, though. It’s a group effort.

AK: So you thought this would be a good experience to get to show off to everyone your own photography skills and the skills of everyone else in the Club?

ZB: Yeah, not only to have more of a solidified club, but so that the campus and the club can work with each other. It may be less about the skills and more about the meaning behind the photos and interpreting the meanings through those photographs.

AK: I’ve gone through all of the photos on the page, and you have over thirty photos up already.

ZB: And you were the first! [laughs]

AK: Yes, I was very happy about that. [laughs] I would go through those and I would see people on there who I see around campus everyday and never talk to, and sometimes I’d think, “I totally agree with what this person is saying.”

ZB: There are so many deep thoughts within the people on this campus. You just see everyone right off the bat and you have no idea what’s going on in their minds. This aims to delve deeper into everyone’s minds and to make us feel like we aren’t alone in our feelings.

AK: What’s something that’s difficult about running the page?

ZB: So, the hardest part is getting started, going up to people, and asking questions. I don’t want to just go up to people and copy questions from HONY.

AK: That can be hard since HONY will ask really simple as well as really detailed questions and he’ll get the same answer no matter how he asks it.

ZB: It’s also difficult in that some of the people I approach feel put on the spot, so they won’t have time to think about what they’re saying. What’s fun though is posting the photos, because I get to see people like and comment on them almost immediately. The responses that people have make me smile; they’re more supportive than I thought they might be.

AK: So something that you’re working on is for the members of your Photography Club to become more personable, so as to ask more focused questions that people will react to?

ZB: Yeah. A big goal for me is to have not only the people in my club, but everyone on this campus, to be more social and open with each other. If we do unlock that, then there’s more positivity that could come out of that.

AK: Sometimes I’ll hang out with people who I don’t ever hang around with, and I have a great time.

ZB: I personally have this huge thing about learning about people’s lives. I like digging into people’s souls and learning more about them, because there’s so much more going on than just your own life.

AK: Did you think the page would grow this large this quickly? Since I checked it, it’s around 1,050 likes. It gained over 200 likes in a matter of hours of being made.

ZB: Well you were there when I made it and you saw my excitement. [laughs] Within a week it had about 400 or 500 likes. The joy of it was when people started spreading it. When I was walking at the Club Expo to set up for the Photography Club, I walked past these two girls who were talking about Humans of SUCO. I thought, “I made that!”
When I was starting out and getting more likes in the beginning, people would talk to me and ask me about it and say, ‘Oh my god, that’s you who made that?’ It felt so motivating and self-fulfilling.

AK: It’s something to show people, too, when you leave college. What are you going to do with the page when you graduate?

ZB: I’ll pass it off to whoever is the president of the Photo Club at that time.

AK: What’s the next step for Humans of SUCO? How are you going to branch out and get more people talking about it?

ZB: Well, currently it’s harder to do in winter because people don’t want to be standing out in the cold. The next step is to have more people in the club to contribute, especially in the spring. I want more organization with it and a certain amount that is posted each week.

AK: Do you think that you’ll be taking pictures of people who aren’t from the campus, or will you keep it strictly about the students?

ZB: I want to include professors, the dining hall staff and everyone else. It’s Humans of SUCO, so it’s about everyone involved on this campus.

AK: Do you have any parting words before we end this interview?

ZB: I’m just very happy with the way everything took off and with the results of this page. I hope it continues to grow.