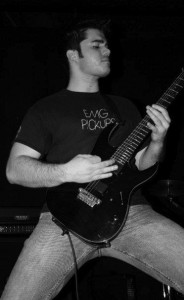 Juan Canteli is a SUNY Oneonta alum currently working downtown at Music Square in Clinton Plaza. He also moonlights as the guitarist for the local hard rock/metal band Into Shadow. The quintet infuses soaring melodies with the blazing precision of thrash metal to create an ultimately unique and fresh sound that can be hard to come by in today’s over-saturated metal scene. I recently caught up with Juan to get a better idea of what Into Shadow is all about.

Taylor Hoysradt: How and when did Into Shadow form?

Juan Canteli: It was sort of a chance encounter. I was filling in for one of Tyler Logan’s old bands called Nasty Midnight (he’s now Into Shadow’s drummer) and we were playing with Max’s (Into Shadow’s singer) former band Autumn Fire. I believe this was the show where we were opening up for Blue Oyster Cult here at the Oneonta Theatre. Nasty Midnight was on first, so Autumn Fire started their set while I was still backstage packing up some gear. But I did catch the second half of their set and was completely blown away by Max’s voice. I guess he sort of dug my guitar playing too, but we never really said anything to each other, other than the typical “hey, nice set” thing that every band always says to the other bands on the bill.
Our mutual friend Don was the real reason this thing happened. He adamantly pushed that Max and I work on some songs together. A few months after the show, Max and I started throwing some ideas around and the project was born. We were initially just going to have him sing over three or four pieces of music that I had written, but the more I got to know Max I found out he was not only an awesome guitar player, but he was an even better songwriter. We just kept writing songs together until we had the skeletons of a few dozen tunes, and then just tweaked the dozen or so that we liked most until they were done.
Max and I pretty much wrote all of the music and arrangements ourselves, and the initial idea was that we were going to program the drums. It was only going to be a recording project at that point. Programming the drums, however, proved to be an absolute nightmare. Luckily, Tyler was moving back from California, where he had launched out to half a year earlier, and we roped him into doing this album with us. So it’s just the three of us on the album. Max is doing all of the vocals, Tyler is doing all of the percussion stuff and I’m playing all of the guitar and bass. After the album was done and we decided to turn the recording project into an actual band, we were fortunate enough to rope in some really phenomenal players to complete the lineup. Jon Romero is our second guitar player who also handles the backup vocals and plays keys, while Russ Kanser is holding down the bass. We really lucked out. I often joke that I want to get someone to replace me so I can just stand out front and watch.

TH: How did you guys develop your sound?

JC: We all just love a wide variety of music. Everything from acoustic finger-style folk to Swedish Death Metal. We worked really hard on this album to write heavy music with strong melodies. We just wanted to write tunes that we’d want to listen to. It’s strange, we have people who enjoy the band with big, bushy beards wearing Slayer t-shirts…and we have 14-year-old girls who love the band who are really into Taylor Swift.

TH: Are there any bands that influenced you guys?

TH: What has been your favorite gig so far?

JC: For me, it was our CD release. From the original idea to make the album to its release, it took about three years. We had talked and talked and talked about it for so long, that I genuinely thought that people stopped caring. I went into that show just looking at it as a celebration of what we had done and figured we’d just be playing for some family and friends. The show ended up selling out. There was a lot of love in that room that night, and I was just completely overwhelmed by it. We’ve gone on to play some pretty big shows with some pretty cool bands…but the CD release will be a tough one to beat for me.

TH: What got you into playing guitar?

JC: When I was four years old I saw an ad on TV for Elvis Presley commemorative plates…and it totally blew my mind. As far as I can remember, that was my first time hearing rock’n’roll. I just had to do it. When I was 10, that was the turning point. I saw Metallica’s ‘Until It Sleeps’ video on MTV, back when MTV played…you know…. music, and that was it. I started mowing lawns almost immediately to get some cash together and bought a plastic $50 guitar out of a catalog. By that November I got my first real guitar for my eleventh birthday.

TH: How do you feel about the direction the music industry is taking as a whole?

JC: It’s so weird. It’s never been easier to get your music out there, but the market is so over-saturated that in a way…it’s never been harder to stand out. Also, in the age of Spotify and albums being put on YouTube, people just aren’t buying records like they used to. As a musician, it can be really frustrating spending thousands and thousands of dollars to make a record that people really enjoy…. but won’t buy. It’s nice being exposed to a large audience, but as they say, you can die from exposure. It won’t pay the bills.

TH: If you were to give an aspiring musician a piece of advice, what would it be?

JC: Play music because you love it, and never expect to go anywhere with it. It’s so much more freeing and enjoyable that way. Have it come from a pure and honest place, ignore trends, don’t treat it like a business and play with a smile on your face. So many incredible bands fall apart long before they get off the ground because they’ve tried to force their music to be something other than what got them into music in the first place. It’s supposed to be fun. Yes, it’s crucial to be organized and to have high standards, but that can be an enjoyable challenge. Some of the most prolific artists of our lifetime struggled for years staying true to themselves when it would’ve been infinitely easier for them to just do what everyone else was doing at the time, have a hit single or two and then fade away. Instead, they turned their music into 40+ year careers. If it’s meant to be, it will be. If not, play those same songs for yourself and your friends and know that you did everything you could to be the best version of you that you could be. Be you, and people will connect with it. Whether it’s a million people or three people, if you made that connection with someone–if your music made them feel something–you’ve won.

TH: Are there any bands that you would love to tour with?

JC: We played a gig with the band Nothing More, and I think they’d be cool to tour with. They seem to be doing everything right. They’re super nice guys and it’d be an awesome learning experience.

TH: Being a SUNY Oneonta alum, how have your experiences at the school shaped your career?

TH: And finally, in typical Juan fashion… Tell me a story.

JC: It’s hard to explain puns to a kleptomaniac because they always take things, literally.