The 5th Wave follows 16-year-old, Cassie Sullivan and 17-year-old Ben Parish during modern day America that has been taken over by an alien race known as “the Others.” There are three narrative point of views in this book: Cassie, Ben and an Other named Evan.
Cassie and her brother Sammy were separated when the military came to Camp Ashpit and took all of the children under 14 to Camp Heaven. Cassie’s father and the other adults were killed by the same people who she entrusted with her brother. We follow Cassie as she tries to fulfill her promise to her little brother to save him from the military camp.
Ben was sick from the plague that the Others spread to cleanse humanity of weak people. We meet him in a hospital in Camp Heaven. He is brought back to health and trained as a child solider. Ben also happens to be Cassie’s high school crush, so we get some of the notorious young adult novel love interest aspect.
Through Ben we see what it is like inside of the military camp, and through Cassie we see what it is like to survive in this alien-invaded America. Evan gives us inside information on the aliens. We meet him while he is stalking Cassie and trying to kill her, but he falls in love with her and disregards his orders.
What I liked about this book was the alien theme and how Yancey took real social problems in our society and had the aliens exploit them. There are a lot of young adult novels about love triangles and utopias, but there haven’t been many that made an alien invaded America work.
The different waves the aliens use to cleanse humanity are scary and well thought out. The first wave was cutting the electricity, the second wave was a tsunami caused by a metal rod dropped from the atmosphere, the third wave was the plague and next was humans infested with aliens who killed the surviving adults.
The characters were interesting in the best way. Cassie was not a heroic heroine, but she also did not complain. Ben was troubled by things in his past, but took the leadership role we expect from young men in young adult books. Evan was a dynamic character; he was creepy and loveable, you wanted to hate him and help him at the same time.
Then you have Commander Vosch, the manipulative villain who you will like when he is “helping” Ben, but automatically hate as soon as the situation flips.
I would give the book a 9 out of 10. If you like the book there is a sequel called “The Infinite Sea” and the movie is coming out next January starring Chloë Grace Moretz as Cassie Sullivan and Nick Robinson as Ben Parish. 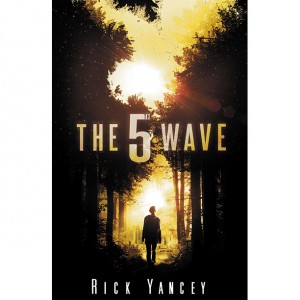