Kombucha tea can go by many other names such as manchurian tea, kargasok tea and tea fungus. This tea has been growing in popularity over the years and is made by adding a culture of yeasts and bacteria called a “kombucha mushroom” or SCOBY to tea and sugar, in order to ferment. SCOBY stands for Symbiotic Colony of Bacteria and Yeast. The SCOBY resembles a mushroom due to its smooth, thick body. Making kombucha tea is similar to brewing beer since the drink varies based on many variables, like strains of bacteria, type of tea, type of sugar, type of water, brewing time, culturing temperature, etc. The resulting drink contains vinegar, B vitamins and many chemical compounds.
Kombucha tea originated in East Asia, then at the turn of the century it was introduced to Germany. Both cultures believed that the tea promoted immunity, which lead to its wider use in the United States. Those who have HIV and the elderly are more likely to drink the tea due to claims that it boosts immunity and slows aging. Another way in which the drink is used is to detox the body. Proponents of the tea tell others to eat only fruits and vegetables while steadily building up how much tea one can tolerate. Kombucha has been promoted as a cure for many conditions including baldness, arthritis, chronic fatigue syndrome, AIDS, stomach discomfort and cancer. According to the American Cancer Society, there have been no human studies published that support any of these health claims.
It is important to know that there are serious side effects that can result from drinking kombucha. Deaths have occurred due to the various molds and fungi that can contaminate the drink. The tea can also be dangerous because after it is fermented, it becomes highly acidic and contains alcohol, ethyl acetate, acetic acid and lactate. Drinking kombucha excessively can lead to hospitalization for acidosis. Our body maintains a pH of about 7.4 and if thrown off by the slightest amount our body’s homeostasis can be shifted severely.
Kombucha is labeled as a supplement in the United States, meaning companies are not required to prove their product is safe or effective to the Food and Drug Administration, as long as they do not make any claims that the supplement can prevent, treat or cure a specific disease. There are many brands that make the tea and if one still wishes to try the drink, be sure to read over the entire packages. Since the tea is highly acidic it should not be in ceramic, lead crystal, or painted containers because the tea may absorb harmful components of the container. Lead poisoning has been reported by those who drink the tea from ceramic pots. Consult with a doctor before drinking kombucha because the health risks are unknown, especially if you have an immune deficiency, are pregnant or have any other medical condition. 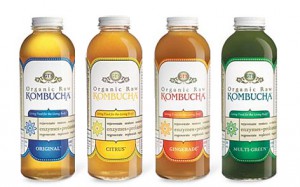