Since they stormed onto the metal scene in 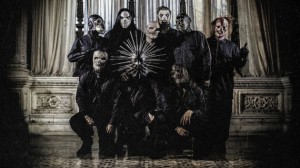 1999, Slipknot has always been a band that is about making changes to further establish their legacy, while still holding on to what made them successful in the first place.

In the six years since their last album, All Hope Is Gone, the nine piece outfit from Iowa have had to do a lot of soul searching and even overcome tragedy. Slipknot’s future as a band came into serious question after the death of bassist Paul Gray in 2010 and the departure of drummer Joey Jordison earlier this year, both major songwriting contributors. Despite these major losses, the band decided to continue on and have dedicated their new album to Gray. In the months leading up to the album’s release, Slipknot launched a massive media campaign designed to build excitement and hype amongst fans. Teaser trailers of songs, tour dates and the new masks of the band members were posted all over social media. The band also created anticipation by keeping the identities of their new drummer and bassist secret. Now the wait is finally over with the release of the band’s fifth album .5: The Gray Chapter.

The album opens with “XIX,” which sets the overall dark mood of the album by utilizing sampling man Craig Jones’ eerie and brooding sound effects. Vocalist Corey Taylor also adds to the morbid ambience by stating, “This song is not for the living, this song is for the dead.” This reflects the overall thesis of the album as most of the lyrics pay tribute to their fallen brother. The album then shifts into high gear with tracks “Sarcastrophe” and “AOV.” These songs epitomize Slipknot’s signature sound by combining fat downtuned riffs, disc scratching, surgical drumming and frantic vocal delivery. “The Devil In I” continues to push the pace but also finds them working more clean and melancholic tones into the verses as the song is about shedding personal demons and moving forward. In the midst of the heavy onslaught, Slipknot also manages to delve into unknown territory on The Gray Chapter. “Killpop” strays far away from the typical Slipknot formula but the electronic elements and pop-infused vocals are a nice change of pace to the first four tracks of the album. It’s on “Goodbye” that listeners are treated to perhaps the most emotional song Slipknot has ever written. The band was devastated when Gray died and Corey Taylor admitted that writing a proper dedication “meant facing some of the emotions that we had dealt with over the last four years.” This song epitomizes everything that happens when losing a friend.

The second half of The Gray Chapter fails to live up to the non-stop action of the first half, but “The Negative One” is the ultimate highlight of the album, showcasing everything that a Slipknot fan could ask for. Right from the opening riff from Mick Thompson and James Root, Sid Wilson’s disc scratching and the signature “Slipknot stomp” from the rhythm section, it is evident that this is Slipknot at their most raw and dark since 2001’s Iowa.

Diehard Slipknot fans will have a hard time growing accustomed to the band’s attempt to branch out on songs like “If Rain is What You Want,” “The Burden” and “Killpop.” But The Gray Chapter still has plenty to offer for any metal fan. What makes this album worth listening to is the raw, emotional display of nine men who are at the top of their game and show no signs of slowing down. However, if The Gray Chapter ends up being Slipknot’s swan song, it would be a good note to end an illustrious career on.