The  SuraBaya  Zoo in Indonesia has become known as the “Death Zoo.” It is called  this  because many of the animals that inhabit it are being treated very poorly. They  are  not  being fed or receiving medical attention and the habitats that  the animals live in are just iron bed cages that don’t get cleaned or maintained. According to viralnova.com, every month more than 25 animals die, and what’s even more alarming is that the zoo claims the causes of death are unknown.
The only animal that was able to be saved from this hellish zoo was a tiger named Melani who was rescued by the group Cee4Life. When asked if the zoo was going to be closed down or not, a representative from Cee4Life said, “The zoo is not going to close down anytime soon, and the animals cannot be re-homed due to diseases. The animals need aid and we are doing everything we can to do that. There are four other people coming at the end of April to try and also help.”
One of the issues is that the zoo’s enclosures are too small and have too many animals living in them. An example is the pelican exhibit which contains 200 birds in a filthy space the size of a basketball court. They don’t even have room to move their wings.
The reasoning the zoo gives for the poor treatment of their animals is that there is not enough cash-flow provided for feeding, housing and breeding. This leads to the animals being maltreated and underfed and since the zoo squeezes several animals into small enclosures, breeding is out of control. If the animals don’t die from starvation, they end up being put down because of other issues that they are suffering from. These animals are so sick that nutrients can no longer be absorbed into their bodies  correctly.  Also, there is a rumor that some of  the animals that die have their special parts, such as fur, sold  to  an  illegal  zoo trade.
News about this zoo has spread virally over the internet and even led to several petitions being made by organizations such as Cee4Life and Change.org. The goal  is  to stop this animal cruelty and shut this Death Zoo down for good. 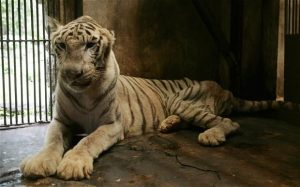