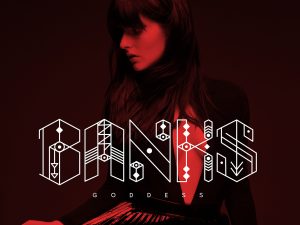 Critics have been waiting for Bank’s’ debut album, “Goddess,” for quite some time now.In 2013, her EP received positive reviews and she had a song featured in holiday commercials for Victoria’s Secret. She also toured in the fall of 2013 as the opening act for The Weeknd. Shazam, Spin, Spotify and iTunes all named her an artist to watch in 2014.
Her relationship with The Weeknd is obvious in her smooth R&B inspired sound. Some of her music is comparable to Lorde, though it mostly sounds like Ellie Goulding and Florence Welch, and at times, Fiona Apple, who Banks cites as one of her greatest influences. Her music is also sometimes electronic, ranging from a cool soft sound to pop. Some songs also feature piano and brass instrument melodies.
She shines in certain instances of moments where she’s pointing out the irony of a lover’s behavior or moving on independently. “Brain” is relatively simple on the surface, but is notable for its smart lyrics and the focus on her vocals during the beginning half of the song. It steadily builds and then features her mixed voice, as more of an instrument than a compliment.
“You Should Know Where I’m Coming From” is a standout. Her vocal strength is more apparent than ever on this track, with strength reminiscent of Apple and a piano-heavy melody combined with emotional self-questioning lyrics.
As expected, many of the songs on “Goddess” live up to the album’s hype. However, songs like “Fuck Em Only We Know” and “Someone New” are less memorable, sappy love songs that don’t quite fit into her cool vibe.  “Someone New” is emotional and nearly acoustic. The vocals sound dull and the song itself doesn’t seem consistent with the sound of the rest of the album.
One thing that definitely makes Banks a unique artist is that her phone number is easily accessible on her Facebook page. In a 2013 interview with Billboard, she explained that she was personally not into social media and her management team handled her pages. Her cell phone number was out there for anyone to contact her and at the time, she said that she answered every single call and text she received. The number is still on the web, but now says that keeping up with calls and texts is becoming difficult, so she is personally managing her Instagram page to continue communicating with fans.
“Goddess” has received mixed reviews, not exactly living up to the super-sized expectations that were put on her at the start of the year. Kathy Iondoli for Idolator wrote that Banks did live up to her expectations, calling the album, “beautifully dark – presenting a level of cautious optimism that anyone in and out of love can find relatable.”
Deviant for Sputnik Music describes her music as a public diary like we’ve all heard before, “tales of unrequited emotions, scorned love–it’s Taylor Swift without the public messiness.” Peter Tebakis for Pretty Much Amazing writes that Banks’ sound is nothing new, giving the overall album a C+.
It’s hard to see how “Goddess” would’ve been interpreted without the heavy pressure that was placed on the artist before its release. Luckily, the strong tracks on the album may just be strong enough to make up for the weak ones of the bunch.