The NFL has had to deal with its share of headaches in terms of players off-field behavior. It feels like now more than ever we are seeing big name players get arrested for drugs, DUI, domestic violence, etc. Recently, Cleveland Browns superstar wide receiver Josh Gordon was suspended for the full 2014 NFL season following multiple violations of the league’s drug policy. Gordon was suspended for two games last season for violating the policy as well.

However, this suspension looks very tame in comparison to that of former Baltimore Ravens running back, Ray Rice. Over the summer, security camera footage of  Rice was released that showed him dragging his then-fiancee, now wife, Janay Palmer out of an elevator at an Atlantic City casino.  Palmer was clearly unconscious.

Following the disturbing footage, it was revealed that Rice had knocked out his fiancee after the two allegedly attacked each other. After this incident everyone expected a stern punishment for Rice, maybe an eight game suspension? No, he gets a two game suspension… Two.

Despite this being the first time Rice has been in trouble, a two game banishment was too light. The severity of the situation called for much more. The backlash NFL Commissioner Roger Goodell received for this lenient punishment was quick and decisive. Everyone began questioning the NFL’s priorities and policy, so much so that Goodell admitted he made a mistake. Questions arose about the discrepancy between the Gordon and Rice suspensions.

Then on Monday, the Ravens finally realeased Rice after footage of the devastating punch was revealed by TMZ. This was a move made by the Ravens organization, not the NFL.
Gordon has been a repeat offender, yet should he be suspended for the entire season for what he did? Rice is a first time offender, but isn’t one time too many when it comes to domestic violence?

From 2002 to 2014, there have been 15 domestic violence punishments dealt by the NFL. The most severe punishment was one player getting a three game suspension. The average number of games those players lost: one and a half. To reiterate, a player could assault his wife, husband, girlfriend, boyfriend, whoever, and only get suspended for one to three  games, while another player could get caught smoking marijuana a few times and lose an entire season. To be clear, I am not condoning marijuana use, just stating the unevenness and poor prioritization in the NFL’s policy and punishments.

Pressure on the NFL to change its weak and murky domestic violence policy has resulted in Commissioner Goodell amending it. Under the new mandate, if a player is guilty of domestic violence for the first time it is a mandatory six-game suspension. If that same player is guilty again, they receive a lifetime ban from the NFL with the possibility to be reinstated after one year. It is a shame that it took a video of an unconscious woman and public outcry for the NFL to change its stance on domestic violence, but they finally got it right with this new policy. Currently the NFL and NFLPA are working to amend the drug policy as well. 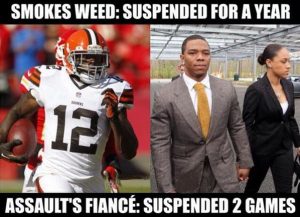