With the 2014 Winter Olympics taking place in Sochi, there is considerable pressure on all of the Russian athletes to perform well and make the medal stand.

This holds especially true for the Russian men’s hockey team after a disappointing tournament in 2010, in which they were unable to win a medal. The team is both nervous and excited to play in  their homeland. Anything less than gold will be viewed as a failure by both the fans and players.

Throughout the history of the Winter Games, no country has been as dominant in men’s hockey as the Russians (or the Soviets). They have won eight golds (all since 1956), two silvers and two bronze medals. But they have failed to finish in the top three since the 2002 Salt Lake City Games.

Their roster consists of a mixture of players from the National Hockey League (NHL) and the Kontinental Hockey League (KHL), the major hockey league in Russia. The Russian offense is very top heavy. There are players such as Alexander Ovechkin (Washington Capitals), Evgeni Malkin (Pittsburgh Penguins), Pavel Datsyuk (Detroit Red Wings) and Ilya Kovalchuck (formerly of the New Jersey Devils) whose names jump out and show just how much potential this team has. Ovechkin leads the NHL with 39 goals in his first 52 games, while Malkin has 55 points in 45 games. Datsyuk is one of the best two-way players in hockey, and is capable of putting up points every night and playing exceptional defensive hockey.

Even with those big names, there are still some questions on offense. While the KHL is a respected hockey league, it doesn’t come close to the NHL in terms of talent. Although players such as Alexander Popov and Viktor Tikhonov were capable of succeeding in the KHL, it is going to be tough for them to play against elite NHL talents from the US and Canada.

The Russian defense is going to be solid. They aren’t going to be able to join the rush and make highlight reel plays, but they will not be intimidated by other teams. Andrei Markov (Montreal Canadiens), Fedor Tyutin (Columbus Blue Jackets), Slava Voynov (Los Angeles Kings) and Nikita Nikitin (Columbus Blue Jackets) are a quality top four, who all are currently playing in the NHL. Markov, 34, is the leader of the defense, and has a very hard shot that will help on the power play.
There is no doubt that the biggest strength of this team is goaltending. The top two will be Semyon Varlamov (Colorado Avalanche) and Sergei Bobrovsky (Columbus Blue Jackets). Both goalies are talented and the Russian coaching staff has not announced who will start. wVarlamov has been the better goalie this season, with a 28-9-4 record  through 41 starts with a 2.43 GAA, while Bobrovsky started the season with a 20-13-2 record, while posting a 2.53 GAA. But,  “Bob” is one season removed of winning the 2013 Vezina Trophy as the best goalie in the NHL.

The Head Coach of the team is Zinetula Bilyaletdinov. He won the 2012 IIHF World Championship. He was also former assistant coach for the Phoenix Coyotes.  In order to win gold, he will need to keep his players disciplined and make sure his stars play hard at both ends of the ice. 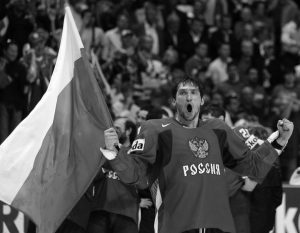