The New York Jets ended the 2013-2014 season 8-8 after an up and down season. Mark Sanchez got hurt early which allowed Rex Ryan to make the decision to start Geno Smith. When Geno had a good game he looked like a solid quarterback, with his ability to both run and pass, but when he was off, he was truly at his worst. The big problem was that it was unpredictable which Geno would show up. Also his offensive weapons were not there. His number one and two wide receivers were injured in the early weeks of the season as well as veteran tight end Kellen Winslow. The offseason needs for the Jets are mostly on offense but the defense needs tweaking as well.
The Jets have a lot of offensive needs. They need to get a new receiving core. Santonio Holmes is a solid player when he is healthy, but he can’t stay healthy and is a huge hit on the Jet’s wallet sitting on the sideline. They need to get young talent from the draft or through free agency. General Manager John Idzik should go with an early pick for a wide receiver. Marqise Lee from USC is coming off of an injury, but his talent and speed would be a great addition to the Jets. He could be a number one receiver for Geno who has a big arm and could hit him downfield. If not in the draft, then they can go after free agents at wide receiver. Eric Decker is the best receiver on the market, but that is a reach for the Jets. Jeremy Maclin is coming off of ACL surgery, which drops his stock. If he comes back and still be a solid player then he will be worth the risk and money.

The Jets offensive line is the core of the running game. They are very strong at run blocking but weak at pass protection. They need to let their young players learn from veterans Nick Mangold and D’Brickashaw Ferguson. This year the improvement will be seen in the offensive line and that is all because of player development. They can however get a solid lineman later in the draft. Jawuan James from Tennessee is a prospect that is under the radar. He can be taken in the third round and could give another dimension to the offensive line.

The defense was  solid this past year, but they need help in the secondary. Dee Milliner had a disappointing rookie year, especially being taken as their first pick. He did progress as the year went on and his improvements will continue during the next few seasons. Antonio Cromartie is making too much money for his poor play. The Jets need to find a solid cornerback in case Milliner doesn’t pan out this season. Aqib Talib could be an option if the Patriots don’t re-sign him. If the Jets don’t make a move to improve their defense it wouldn’t be the end of the world. They were solid all season and would be just fine if the offense can score.

If the New York Jets want to make a run for the postseason they are going to need to get new weapons. A solid player for Geno to throw to is the key to staying in games. They then don’t have to only depend on their defense to keep them in games. With these changes, the Jets can make a push for the playoffs. 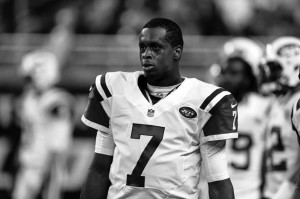