At the start of the 2013 NFL season, the Philadelphia Eagles coach, Chip Kelly, named Michael Vick as their starting quarterback with Nick Foles as his backup.  But with Vick’s hamstring injury in Week 5 against the New York Giants, and Foles’ record-tying seven touchdown passes in Week 9 and 406 throwing yards against the Oakland Raiders, Coach Kelly might be re-thinking his choices.

An Alabama State graduate, Foles has thrown 13 touchdowns and zero interceptions in 118 passing attempts, while Vick threw only five touchdowns and three interceptions in 141 pass attempts. In the first four games of the season, Vick had difficulty and only completed 54.6 percent of his passes. His hamstring injury was almost a blessing for the Eagles, because no one can know for sure if Kelly would have given Foles a chance to start.

On the other hand, during their Week 7 matchup against the Dallas Cowboys, with Vick still out, Foles completed only 11 of 29 passes for 80 yards before coming out in the fourth quarter due to a head injury.  While out, Foles was replaced by rookie Matt Barkley, who did not perform up to par, throwing zero touchdowns and three interceptions, reassuring Foles’ starting spot. But in Week 8, Vick was back in and the Eagles fell to the Giants 15-7 on their home field.

The Eagles’ win over the Raiders was a turn around for the Philadelphia season. Foles’ incredible seven TDs (three to Riley Cooper and one each to Brent Celek, Zach Ertz, LeSean McCoy and DeSean Jackson) were a complete change from their failed touchdown attempts in the past two games. Although Foles did well in the next week’s game against the Packers, I think it is too soon to tell if he will remain the starting quarterback or if Vick will come back in and take his old job back.

Foles has had a great couple of games, but we cannot forget his inconsistency in his game against the Cowboys.

However, while the beginning of the Eagles season was not looking promising, his unexpected and impressive three wins in  four games gives Philadelphia fans hope and something to finally get excited about. 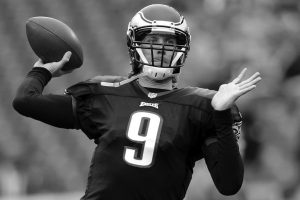