Taylor Hoysradt, Staff Writer
Since the beginning of the 2013-2014 season, the Buffalo Sabres have made it clear they are planning to rebuild and get rid of some of the team’s bigger contracts. On October 27, the team traded star forward Thomas Vanek to the New York Islanders for Matt Moulson, along with a first round pick in the 2014 draft and a second round pick in 2015. Both players are two of the leagues more consistent goal scorers and have the ability to score at least 30 goals every season. This deal works well for both teams in the short-term, but the long-term solution for each team differs greatly.

Vanek gives the Islanders more offensive firepower  while being on a line with John Tavares and Kyle Okposo will allow him to post up in front of the net and put in a lot of rebounds and deflections. Don’t expect Vanek to stay with the Islanders in the long term for a few reasons, most importantly his contract. Vanek is in the final year of his seven-year, $50 million contract and is due to make $6.4 million this season. While he is getting older, Vanek will still be looking for a similar salary when he receives a new contract from a team and that team will most likely not be the Islanders. New York is a young team and they will continue to stay young and possibly try to trade Vanek at this year’s deadline for some help at the blue line.

Buffalo won this trade mainly because they acquired high-value draft picks in the next two drafts. The Sabres are also looking to deal longtime goalie Ryan Miller for more draft picks and they could even possibly deal Moulson as well for even more picks. Both Miller and Moulson are worth at least a first round draft pick and if both players are traded, Buffalo could end up with three or four first round picks in next year’s draft. For a team that is rebuilding and trying to get younger, draft picks are the ultimate commodity.

Both teams are headed in different directions in the standings right now, and having the same mindset of keeping a young roster with team chemistry as the focus. The Islanders will make the playoffs for a second straight year while the Sabres are a couple of years away and will continue their rebuilding process. 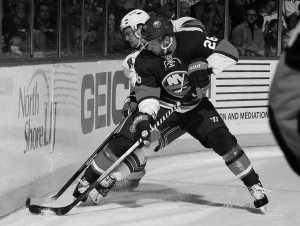 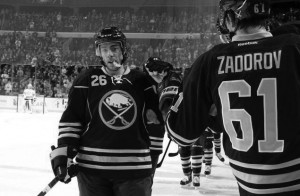