On February 21, Alessandro Michele’s 2018 Gucci collection captured audiences at Milan Fashion Week. The show was largely an analysis of the fashion designer’s process; Michele explained that the creative job is “cutting and assembling and experimenting on the operating table.”

This was depicted as models walked around two operating tables illuminated by surgical lights. The atmospehere was a sterile and clinical. Aside from blue hospital beds and bright, ominous lights above, there was enchanting instrumental music with alien-like soprano vocals, accompanied by ticking simulating a clock. Additionally, there was sporadic yet controlled beeping, and the sound of a beeping dead telephone line.

The scientific-eeriness did not end with hospital imagery. One model held a live snake in her hand and another somehow had a third eye on her forehead. There was one model who cradled a small freshly hatched dragon, its pink sinewy skin distinctly strange. Perhaps the most disturbing aspect of the entire show was the two models who, in place of handbags, held hyper-realistic replicas of their own heads with identical hairstyles, makeup, and facial expressions. When asked about the symbolism of these heads after the show, Michele responded that they were about “accepting oneself” and “looking after your head and thoughts.”

Michele took inspiration in part from Donna Haraway’s essay in 1984, “A Cyborg Manifesto,” which is a critique of “the idea that people must fit within predefined cultural boundaries.” This was apparent in the South American patterns, hijabs, the Sikh turbans, and the headpieces that resembled traditional Chinese architecture. The representation of cultures that are not European-centric was refreshing, but the problem lied with the models. All the non-white cultural attire was worn by white models.

Gucci received a lot of backlash for this blatant cultural appropriation. This was especially true for the turbans, which specifically represented Sikhism, a religion infused with Indian culture. There were also western models wearing hijabs, an item of clothing that many Muslims wear and is a part of Middle Eastern culture, as well as South American patterns and headpieces.

Many critics took to social media, specifically Twitter, to call out the cultural appropriation. It was stated explicitly that it is extremely disrespectful for white people to wear garments that others are consistently harassed for as a result of their ethnicity or religion. The fact that white models wore hijabs, turbans, etc. completely erases the struggles of non-white, non-Western people, and in turn reduces their culture to a simplified fashion fad.

It is unknown whether or not Gucci creators felt the need to defend themselves, but perhaps in an attempt to win back some of the respect of the public, the company donated half a million dollars to March of Our Lives, the march organized by the students of Stoneman Douglas High School in Parkland, FL to advocate for gun control. Regardless, it was a kind and certainly effective gesture. Hopefully future fashion shows do not comprise of cultural appropriation, but rather employ models of color and the pertaining religion and/or ethnicity integral to the clothing piece. 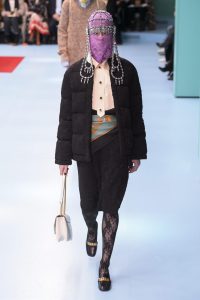