Every four years, we hear newscasters and political observers saying that “this is the most important election ever.” Beyond the cliche, they are mostly right, as our democratic process provides us with the opportunity to steer America’s direction for the next four years.

Understanding this responsibility, we appeal to you as five newspapers on SUNY campuses who have never before collaborated on one project but are doing so now. We join together, students of various backgrounds and independent life experiences, to denounce Donald Trump, his campaign and his relentless pursuit of the presidency. We stress that every SUNY student go exercise their right to vote, but urge you to avoid selecting Trump.

We are a collective of student newspapers, which means we have the closest connection to our respective student bodies. We report on and tap into the thoughts, feelings, ideas and politics of students all across New York state.

We know that Americans have become staunchly divided by this election, and Trump encourages this divisiveness. Our patriotic unity has already been damaged enough and there has been increasingly less tolerance for our citizens’ political and personal diversity. America should champion a spirit of acceptance, compassion and companionship. Understandably, many people feel that they would be betraying their party by not voting for Trump. However, this election is different. This election is about more than furthering the Republican or Democratic agenda; it is about our ideals, freedoms and identity as an American community.

We at The New Paltz Oracle denounce and reject Trump’s attempt at the presidency as it represents an assault on the common decency of this country. Since last June, the national news media has been hijacked by a manipulative wannabe, littering our political dialogue with discriminatory comments against immigrants, women and journalists. Nothing in this campaign indicates that he has any place running for the highest office in the nation.

The few promises that he has backed up with certainty and precision — namely, “extreme vetting” for Muslims and the wall for Mexico — border on the fantastical in terms of practicality. They also make up almost all of the memetic appeal of Trump’s platform; perhaps they were the only promises he deemed necessary to back up with specificity.

Let us not forget that Trump himself said that women who get abortions should be subject to “some form of punishment,” at a campaign event in Appleton, Wisconsin back in March.

Looking beyond his expression of toxic views that have alienated Republicans, Democrats and Independents alike, even casual observers of this election have noticed the characteristic vagueness that Trump’s rhetoric relies on.

Despite the fact that Trump himself has been careful to avoid promises, his supporters have filled in the blanks easily enough. His rallies have achieved infamy for the intolerance and violence which can only reflect what his platform for presidency really depends on. A Trump presidency is an ignorant, bigoted and racist presidency and must be avoided at all costs if there is hope for social harmony in this country.

From SUNY Oneonta’s The State Times: Trump said that he wants to change the First Amendment, which secures America’s freedom of speech and is the very principle that has allowed Trump to threaten our most basic human rights. He wants to censor the media, which is a dictatorial tactic used by countries like North Korea, run by totalitarian Kim Jong-Un, for whom Trump has expressed admiration. Trump wants to inhibit the medium that has been and should continue to expose his corruption.

He has proposed that America refuse Muslim immigrants, surveille the mosques of Muslim Americans and make them wear special identification like Jewish citizens in Nazi Germany, defying this country’s ideals of religious freedom, open arms and equality. Trump wants to appoint a Supreme Court Justice that would repeal marriage equality and women’s rights to their own body.

Reflective of his character as a businessman, which people falsely admire, Trump wants to lower the minimum wage and he has been sued for discriminating against minorities by not hiring them or housing them in his apartment complex. What’s more, he is being investigated for fraud upwards of $40 million, due to false advertising and profiting from hardworking students that attended Trump University.

SUNY Plattsburgh’s Cardinal Points is disgusted and angered by Trump’s racist and sexist remarks, including his sexualization of his daughter. Without even digging deeper into the consent issue, Trump has also measured a woman’s character solely on her appearance. He also insinuated that because Bill Clinton cheated on Hillary, she could not “satisfy” him, which meant she was not fit to “satisfy” the United States as president.

Cardinal Points also disagree with his lack of respect for other religions and cultures. During a recent campaign rally in Alabama, Trump supporters physically attacked an African American protester after the man began chanting, “Black lives matter.” The next day Trump tweeted, “Maybe [the protester] should have been roughed up. It was absolutely disgusting what he was doing.”

That being said, he and his following also promote violence, attacking those who do not agree with him. Rallies in Minneapolis, San Jose and Denver, just to name a few, have all turned violent.

Cardinal Points believes Trump is also very quick to insult the media, the very powerhouse that has built his business empire with endless news coverage and broadcasting of “The Apprentice.” He said if elected president, he would work to open up libel laws, discrediting the First Amendment.

“One of the things I’m going to do if I win, I’m going to open up our libel laws so when they write purposely negative and horrible and false articles, we can sue them and win lots of money,” Trump said during a rally in Fort Worth, Texas.

Lastly, he avoids paying his taxes, which means he does not provide for the military, veterans or education. Not only does he avoid paying taxes, but he has said he is “smart” for finding loopholes. Cardinal Points wants to know: Does that make average law-abiding citizens who do pay taxes stupid?

Trump claims to be a better candidate for women than his opponents, but SUNY Fredonia’s The Leader knows this to be the most transparently false claim a presidential candidate has ever made. The outrageous comments he made in the leaked “Access Hollywood” footage are only the tip of the iceberg, as the mogul has been equating women to sex objects in the press for decades. Much of what he has said is unfit to print, but the stories of what he has done are even worse. According to CNN, at least 10 women have come forward claiming that Trump has either inappropriately touched them or attempted to. By all accounts, he is a man who thinks he can own women.

Despite his reprehensible public and private behavior, we also can’t forget that his policies would be incredibly damaging for women around the country. Trump believes that Planned Parenthood does great work, but wants it defunded anyway to get rid of abortion. He previously suggested that women who seek out abortions should have “some form of punishment” before backing off that stance; it’s nonetheless unheard of for a presidential candidate to speak so callously.

SUNY Brockport’s The Stylus believes that Trump is the embodiment of ignorance. It seems we’re in a time when a presidential candidate can lack knowledge in foreign affairs, immigration policies and our basic constitutional rights, and somehow still maintain a decent percentage among voters in national polls. He doesn’t seem to know exactly what he’s talking about or what he stands for, bouncing between “I don’t know anything about Russia,” and “[Putin’s] doing a great job in rebuilding the image of Russia and also rebuilding Russia.” It’s the same person with two very different views, and one of those views shows his lack of qualifications for the U.S. presidency.

Trump’s ideals are entirely un-American; he describes a government that neglects, profiles, polices, censors, profits off of, makes choices for and obstructs the growth of its citizens. Trump is an entitled man that thinks other Americans have it too good. This refusal to have Trump represent us is not just based off of his appalling character as a person and lack of knowledge as a presidential candidate, but also his dangerous, self-seeking policies made to benefit himself as part of the top one percent of the country.

We are speaking to our generation, but it doesn’t stop with us. It’s going to take others to not elect him. We are five SUNY campus newspapers with many more than five different reasons not to vote for Trump. As journalists, we believe in truth and that Trump is not the choice for the office of the presidency. We, collectively, aren’t endorsing anyone. We will all go into the ballot boxes and vote, whichever way we so please, but it will not be for Trump. There are plenty of choices, but only one to move the country backwards. On Nov. 8, ignore one of the boxes.

This editorial does not reflect the overall views of the specific universities represented here by their campus newspapers. This piece is not a collective endorsement of any specific candidate in the presidential election. 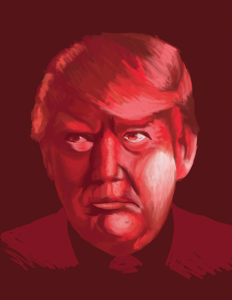