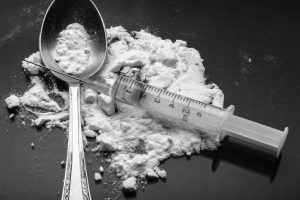 Last week while leaving Moe’s after a tasty lunch with my boyfriend, I witnessed two ladies who stuck out like a sore thumb against the backdrop of busy Southside. They were strolling arm-in-arm down Route 23 without a care in the world. Clearly strung out on drugs, the pair seemed to not even be aware of the traffic around them. They were unable to stand on their own, significantly underweight, and hardly had their eyes open. It’s sights like these that I take notice of as a college student, but forget shortly afterwards.

It’s no secret that Oneonta is a town crippled by the heroin epidemic overtaking America. Our eyes frequently glance across headlines that describe arrests in connection with heroin busts or deaths as a result of an overdose. How could such an obscure Upstate New York town be affected by this hard drug? Where do these drugs come from, and why have they struck down a small city that is relatively isolated from those of a larger size?

Heroin is classified as an opiate drug that when injected, insufflated, or smoked creates a euphoric rush, followed by a sporadic wakeful and drowsy state. With repeated use, the narcotic deteriorates the brain’s white matter, altering the user’s decision-making abilities, the ability to regulate one’s own behavior, and the ability to respond to stressors. Essentially, repeated use of heroin steals a human’s ability to function within society as they had prior to addiction.

The user’s body converts heroin into morphine, the powerful depressant relied on by doctors to alleviate the pain from which patients suffer. Morphine is a highly addictive opioid that is easy for the patient to become dependent on. This is where most heroin addicts get their start in regular narcotic usage.

Among the most commonly misused drugs in America are the prescription pain medications Oxycontin and Vicodin, which have similar effects to heroin when taken as prescribed or improperly used. Patients prescribed these legal painkillers often are not aware of how easily they might develop a dependence and abuse the drug, as they are given out by doctors and marketed as “safe and effective” by pharmaceutical companies, out to make millions.

According to the National Institute on Drug Abuse, nearly half of young heroin users reported abusing such prescribed opioids prior to injecting heroin. They chose the latter because it is cheaper and easier to obtain than the prescriptions, especially for the lifestyle circumstances associated with such drug use.

Those who fall into an addictive cycle of taking “smack,” a slang term for heroin, often commit crimes to get their fix, primarily in the form of property theft. Sometimes, addicts are forced to sell heroin to support their own habit. They cannot reasonably hold a career, and if they are fired they must search for a place that does not require the passing of a drug test to be hired. Heroin addicts also put a strain on the social service system, whether it’s with family services assisting their neglected children or the receipt of welfare benefits. As reported by The Daily Star, Delaware County Undersheriff Craig DuMond estimates that nine out of ten people arrested locally in relation to illegal drug possession are also receiving public assistance benefits.

But the people who choose to abuse narcotics and become addicted to them are not inherently evil as some members of society make them out to be. Heroin addicts are people too—they have families, they have likes and interests apart from drug use, and they have unrealized dreams. It’s unjust to punish these people via incarceration and jail sentences that fail to effectively reform their unhealthy behavior. Addicts deserve a second chance and should not be likened to sexual offenders and murderers as felons. Becoming hooked on smack does not necessarily make someone a criminal, and those who suffer from addiction should be treated as patients with a health problem.

The War on Drugs has begun to end with the Obama administration. The President has made efforts to prioritize treatment over criminalization, proposing $1.1 billion in funding for the states to train health providers and drug prescribers in rehabilitation efforts. But his tenure as our country’s leader is almost through, and both candidates put forth by the two major policies are less forgiving than our current leader when it comes to prosecuting drug addicts.

The United States is far behind the rest of the world when it comes to drug rehabilitation efforts. Injection sites, where heroin users can take the drug in a clean facility, with sterile needles, under medical supervision, have existed in Europe for decades. With such sites, the number of overdoses decreased as well as complications from non-fatal overdoses according to the Drug and Alcohol Review. Such sites also lower the chance of an addict becoming infected with HIV as a result of sharing needles with other users, which could contaminate their blood. Less discarded needles are found outside where children play, and addicts can accept the recovery process with peace of mind and no fear of incarceration.

The injection site model has been adopted not too far from Oneonta in another Upstate New York college town: Ithaca. The Ithaca Plan, implemented by 29-year-old mayor Svante Myrick, offers injections sites that administer naloxone, a drug which combats overdose, as well as addiction counseling and health services. Such a facility draws heroin users out of the shadows onto a pathway of treatment. Critics describe the service as the first steps towards heroin legalization, but why not give it a shot?

Oneonta needs to take more steps towards providing treatment options for heroin addicts in and around the city. Not only would this improve the health of users struggling with a heroin addiction, but assist them in getting on their feet and out of prison. This assistance would take the strain off our local social service system and enhance the lives of the children of heroin users, who may not follow in their parents footsteps. It’s not only up to the government and local addiction relief councils to promote rehabilitation over incarceration, but also the two college communities of Oneonta to support our fellow humans in their battle against narcotic usage.