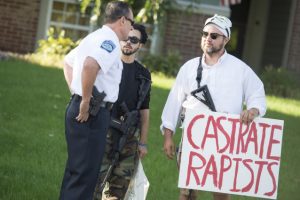 The case of Brock Turner is an appalling miscarriage of justice that highlights an important issue facing young Americans, especially young women. It shows us many issues we have in the dealing of rape and sexual assault cases in our society. Unfortunately, when these events happen the American public oftentimes misses the boat and targets their outrage to the obvious and simple.

Public outcry for Brock Turner’s head was most definitely warranted and earned by the rapist; his blatant disregard for the severity of his crime and his portrayal of himself as the victim makes him a worthy candidate for scorn. Also deserving of public disdain is Judge Aaron Persky, who only sentenced Turner to six months in prison (he only served three, getting off for “good behavior”), because a longer sentence would be damaging to Turner. More damaging than what Turner did to his fellow classmate?

This case unsurprisingly brought out a lot of anger among young people in the U.S. who blew up many Facebook and Twitter feeds. To these new crusaders in the war on injustice, I say, I stand with you, but your anger is misguided.

To clarify, I am in no way defending Turner or Judge Persky, but I believe real change is not going to come if we focus on two select members of the problem. It feels good to scorn two people who are despicable in nature and who have done some terrible things. But the fact is that we, as young college students eager to change the world, should not lose sight that American society is riddled with examples of misogynistic and sexist ideals that create these very problems. Women living under our patriarchy are at risk for these attacks, but picketing the Turner household or removing Judge Persky from the bench is not going to change that.

Hopefully most of you know that we live under a white patriarchy that oppresses women into conforming to our idea of what it means to be a woman. By the same token, men are socialized to believe that their self-worth is determined by how many women they “get.” This is an inherently possessive ideal. Some young men internalize this concept and begin to view their female peers as targets to gain social acceptance. In these young boys’ minds, the girls around them become objects for not only their sexual pleasure, but tools for their social mobility. This leads to rejection as being viewed as a denial of their social prowess. Young men lash out in violent or hostile manners as they now take a “no” as a threat to their manhood.

In Brock Turner’s case, he also grew up under class privilege. Coupling class privilege with objectification, the power of “no” is erased. These boys who grow up with the idea that they are entitled to the things they want become young men who see women’s bodies as things to own.

Turner was possessive of his victim. The fact that she was unconscious or if she said no did not matter to him. Her rejection or inability to be an equal participant was meaningless because of his belief that he was entitled to her body. Turner’s case is the embodiment of college rape culture; the idea that men have unlimited access to women’s bodies. Although rape culture often shows itself on college campuses, the seeds are laid from birth in our teachings of young males and females about how to conduct themselves in the gendered social arena.

Clearly, there is a societal problem that is contributing to our rape culture that needs to be addressed. Holding men who commit acts of rape and sexual assault accountable for their actions as well as amending the justice system to better serve victims of sex crimes are important steps, but they are only the equivalent of placing a Band-Aid on a stab wound. What happened at Stanford is a horrible by-product of the culture society has created for our adolescents. It is easy and feels good to skewer Brock Turner, but in reality, he turned into what he was socialized to be.