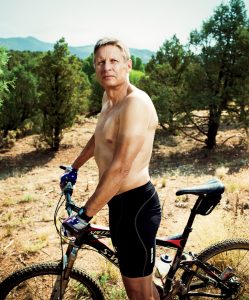 America is now less than three months away from deciding on our new President for the next four years. Some have deemed this the most dramatic presidential campaign in history, and I believe that the majority of us living through it would agree with that statement.

The most popular understanding of our ensuing election is that people have two choices: Hillary Clinton, the Democratic presidential candidate, or Donald Trump, the Republican presidential candidate. Although these two magnificent choices will be on the ballot, there will also be a third-party candidate on every ballot in all 50 states (as well as D.C.) during this year’s election.

Gary Johnson announced his running for president on January 6 of this year, and received the Libertarian party nomination on May 29. The question is, who is Gary Johnson?

As previously stated, Johnson is the Libertarian Party nominee of the 2016 election. He served two full terms as the governor of New Mexico, from 1995 until 2003. During his time as governor, he focused on cutting government taxes and spending, and reducing the size of the government in his state. Johnson describes his government position as “fiscally-conservative, socially-liberal.” This simply means that his policies on the economy agree more with the Republican point of view, whereas his position on social issues agree more with the Democratic point of view.

Ballotpedia.org explains that, “…as the Democratic and Republican nominees have both experienced historically low favorability ratings, Johnson has managed to reach as high as 13 percent in national polls. Much of his campaign has centered on raising that number to 15 percent, which would allow him to participate in the general election debates in September and October.”

As most of us have seen, the #letgarydebate movement appears to be picking up steam on social media. Johnson’s face has been floating all over Facebook as his team attempts to use mass media (outside of news stations) to promote his campaign and gain enough popularity to allow him to enter the 2016 presidential debates.

On September 6, the Boston Herald published an editorial that stated, “Allowing Johnson to debate on September 26 would provide a valuable service to an unhappy electorate. The commission should give him a microphone.”

In the event that Gary Johnson does make it into the 2016 presidential debates, here are some of the view points you will hear him discussing:

Johnson does not support the death penalty. He’s interested in ending the war on drugs, and is pro-choice when it comes to women and their bodies. Johnson believes that deporting all of America’s immigrants is “crazy,” and stated that immigration should be embraced. When it comes to marriage equality and gay rights, Johnson explains that Libertarians have always been at the forefront of these movements, and fully supports both. In addition, Johnson’s view on transgender people and restrooms is that they should be able to use whatever they’re most comfortable in.

Economically, Johnson would like to eliminate income tax, corporate tax, and the IRS. Instead he would install one federal consumption tax. He does not support having a federal minimum wage, and would like all of his policies and practices to be 100 percent transparent.

So here’s the issue; there’s a large handful of people who trust that Gary Johnson is going to split the Democratic vote between Clinton and Johnson, leaving Trump as the winner of the 2016 election. It can be argued that voting third-party is a “wasted vote.” It can also be argued that if enough people take the chance, we could elect a third-party candidate as our next president.

Here’s what Gretchen Dizer, a registered independent, responded when asked why her vote is going to Johnson: “Gary Johnson isn’t perfect, but he is a politician I trust. When he makes mistakes, he acknowledges them. He doesn’t deflect or make excuses. He takes responsibility and I like that. I also like that he focuses on the issues and doesn’t get caught up in the mudslinging of campaigning AGAINST someone else. Instead, his focus is on campaigning FOR issues that are important to the majority of Americans.

The two party system has polarized the nation. Gary brings us back to the issues in a very realistic and relevant manor; things I believe our nation has lost sight of. As far as voting for a third-party and the notion of a ‘wasted vote,’ a vote is a vote. The younger generations of voters are fed up with their voice not being heard because of the two-party system, and voting third-party is standing up to a polarizing system. That’s something our country desperately needs.”

Keep up to date with candidates’ views, know your options, weigh them out carefully, and vote responsibly!