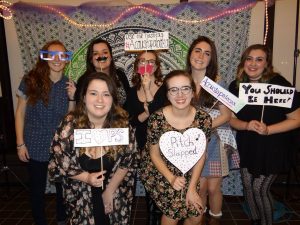 place in M201 in the Fine Arts building.

While each of the opening group’s performances were top notch — especially SUNY Binghamton’s rendition of the humorous song “Shia Labeouf” — it was Pitch Slapped who truly dominated the night. Opening up with “Hold My Hand” by Jess Glynne, it was evident that Pitch Slapped had been working to make this performance perfect. Up next was one of the group’s most frequently performed pieces, “Lay Me Down” by Sam Smith. Normally, Lauren Giacalone sang the solos for this song, but since she w 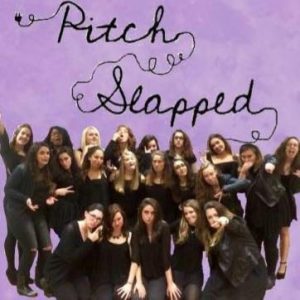 as out of town during the night of the performance, freshman Hannah Smith stepped in for her. Smith did the song justice with her bright voice.

One of the strongest songs for the group was “That’s How You Know” from the Disney movie Enchanted. Hannah Smith also performed a solo for the song, in addition to Kaitlyn Sheehan. The two bounced back-and-forth while the rest of the group added the upbeat energy needed to give “That’s How You Know” its characteristic Disney charm.

The penultimate song of Pitch Slapped’s performance was the senior song, in which only the graduating seniors took part. Julia Rosa, Caitlin Weiner, Megan McGuinness, and Megan Palmer created a breathtaking four-part harmony of “Run to You” by Pentatonix. It was hard for the rest of the group to keep it together; tears were soon falling as the seniors worked their way to the climax of the song. It even became too much for the singers, as they broke out into emotional laughter right before the last note of the song.

Finally, the whole group reformed to perform their final song of the night. The song was a mash-up from the movie Pitch Perfect, featuring key parts of the songs “Price Tag”, “Don’t You (Forget About Me)”, and “Give Me Everything”. The performance featured numerous soloists, with every senior getting their own spotlight. Pitch Slapped clearly put the most amount of effort into perfecting this song, as the energy between the members was palpable. The performance ended on the line, “Let’s do it tonight,” and cheers immediately erupted from the audience.

Pitch Slapped’s final performance further cemented the strength of their presence on Oneonta’s campus. It will be exciting to see what the future has in store for the group.