Over the years, new theories about the subliminal messages hidden in movies have been spread throughout the Internet. While these theories are entertaining to search for, most of them are not legitimate. However, one theory, The Pixar Theory, appears to be based on facts with sufficient information to back it up.

The Pixar Theory, created by Jon Negroni in 2013, is the belief that all the characters of Pixar movies exist in the same universe and are connected. After watching a video on Cracked, Negroni was introduced to the idea that all Pixar movies could be connected somehow and was inspired to complete what he calls “The Pixar Theory.” Part one of the theory connects the first 14 Pixar movies from Toy Story to Monsters University. Parts two and three include how Inside Out and The Good Dinosaur fit in, respectively.

In this theory, the movies are reorganized out of the order they were released into a more chronological order based on the setting of the movies. Beginning with Brave and ending with Monsters Inc., Negroni explains how the characters, events, and stories of each movie connect to one another in a loop.

In Brave, it was the “will-of-the-wisps,” or magic, that Merida discovered allowing the future birth of superheroes, as seen in The Incredibles. The creation of Zero Point Energy in this movie was absorbed by toys, giving them power to obtain human-like qualities. Toy Story and Toy Story 2 are the next section of the theory.

In these two movies, the toys discover how dangerous isolation from humans can be, because they need human energy to stay alive. They carry resentment toward humans when abandoned. Resentment was not only seen in the toys, but also in animals because humans destroy the Earth with pollution and control their lives.

Toy Story 3 introduced the riff between humans, inanimate objects, and machines, which Carl and Ellie from UP believed will inevitably control the world in the future. This was why they wrote to Andy and told him to get rid of his beloved toys, as seen in a postcard in his room. Carl was essentially right in his warning, because technology gave animals the ability to communicate with humans, as noted with Dug. With the help of technology, humans were forced off of Earth due to pollution. As a result, cars took over the world, as shown in Cars and Cars 2.

Human life continued in space, while Wall-E remained as the last functioning machine on the planet. Here he discovered a plant, which overtime grew into the tree seen in A Bug’s Life. From evolution and mutations, a bug’s lifespan had increased in length, allowing a creation of a new colony. Centuries later, animals evolved into the monsters of Monsters Inc. After realizing the vital importance of human life, the monsters created technology allowing them to travel back to times where humans existed to gain their energy.

The reason this theory is a loop is because Negroni believes Boo, the little girl from Monster’s Inc., became the witch in Brave. As seen in a carving in the witch’s workshop, Sully made a cameo. The magic discovered in the movie made the timeline loop which was used to travel through time in hopes of finding Sully.

Like any theory, if studied and examined enough, loopholes and questionable errors can be found. The Sully cameo in Brave is not only an example of how The Pixar Theory works, but also of the many “Easter eggs” Pixar hides throughout all their movies. 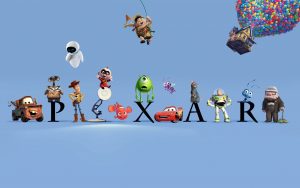