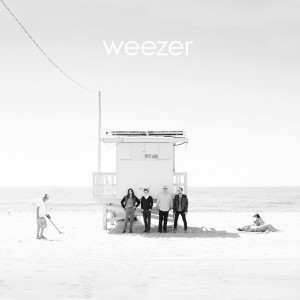 Weezer fans, across the board, are always talking about “Old Weezer.” This refers to the band’s initial albums — Weezer (Blue Album), Pinkerton, and for some, that even falls into Weezer (Green Album) — which were all released 15 (or more) years ago. This was the bands original sound, the surf-grunge/nerd-rock that made Weezer fans fall in love with them.

This past April Fool’s Day brought a new album for Weezer fans, self-titled Weezer (White Album). Luckily, the album release, and album itself, was not a joke.

The band paid homage to their three previous self-titled albums, which were the Blue, Green, and Red Albums. The band may have chosen white for this new album because it symbolizes purity and new beginnings, but that has yet to be confirmed.

Weezer (White Album) has brought the band out of the awkward, pop-rock stage they have been in for the past decade. The songs have the same catchy sound that the band had back in 1994 — the same year current college seniors were born. The fact that the band has fans that were not even born when they first gained their popularity makes them a timeless band for all generations.

One factor that the White Album brought to the table was a strong surf-rock vibe. Critics have been comparing this album to a modern-day Beach Boys album. Although lead singer, Rivers Cuomo, is from the east coast, he nails the west coast vibes that The Beach Boys Californian-native singer, Brian Wilson, nailed.

The opener of the album, “California Kids”, sets the mood with sunny, Californian vibes. The song opens with sounds of seagulls and beach waves.

This is most likely due to the fact that Cuomo spent all of his time on California beaches and boardwalks to get inspiration for this album, and it totally works for this alternative-rock band.

Cuomo took the inspiration search to the next level, and created a Tinder profile for himself. The 45-year old, married-with-kids singer made it clear in his bio that he was purely looking for new perspectives and experiences for inspiration.

The results of this inspiration-search are evident in Cuomo’s lyrics. In the track, “Summer Elaine and Drunk Dori”, Cuomo sings ‘I suck at getting off the phone, boy in the bubble, saying “I love ya”’. This could be a reference to modern day romances and relationships.

“King of the World” is accompanied by a hilarious music video that features a man dressed as a king, who is most likely intoxicated from drinking from his chalice, running down a boardwalk. Almost all of the video is in black-and-white, except for a burst of colors in the beginning. The opening clip is a flash of blue, green, red, and lastly white. The colors were in the same order that Weezer’s self-titled albums came out in.

The band is going on tour this summer with last year’s OH-Fest headliner, Panic! At The Disco. Weezer kicked off their tour in the United Kingdom, and will be spending the summer traveling the United States to give fans a refreshing taste of the “Old Weezer” that they love.