Blackfish, a documentary released in 2013, delves into the story of a killer whale, Tilikum, and the horrors and controversy behind killer whale captivity. It focuses mainly on SeaWorld, one of the most well known marine parks in the United States, with three locations in Orlando, San Antonio, and San Diego.

The documentary goes into great detail about how friendly and social these animals are. It stresses the fact that in the wild, they live in large groups and can have the lifespan of a human. While in their natural habitat, they do not have a history of aggression, but in captivity, aggression is immensely more common due to confined living areas and living situations with other whales. Their dorsal fin is always straight up in the air when observed in their natural locations, but in captivity they have dorsal fins that are curved downwards. SeaWorld, however, claims that this is a “normal” behavior.

The documentary goes on to talk about SeaWorld’s biggest orca, Tilikum. It describes many of his aggressive behaviors and the deaths of three of his trainers, which he caused. It is said in the documentary that animals in captivity can only go so long without presenting some type of frustration due to their living situation and constrictions. Killer whales are not seen as aggressive towards humans, but when put under these circumstances it is questionable how long they can go without snapping. Tilikum has had 21 offspring, 10 of which are still alive today. The majority of SeaWorld’s killer whales are related to Tilikum. SeaWorld has not taken a killer whale from the wild in over 40 years. 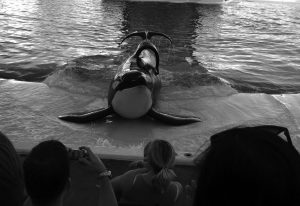 According to SeaWorld’s website, they have stopped their killer whale breeding altogether. They have also declared that they are moving towards ending the shows and will start redesigning the killer whale living areas to be a more “naturalistic setting.” This change will start with the San Antonio location next year.

The website also features “69 Reasons You Shouldn’t Believe Blackfish” and explains why some of the claims in the documentary are false. For example, it states that, “The film falsely suggests that important facts about Tilikum were concealed from his trainers and that SeaWorld is indifferent to trainer safety.”

Regardless of who is right and who is wrong in the accusations and claims, the fact that there are still 23 orcas in captivity between the three SeaWorld locations is alarming.