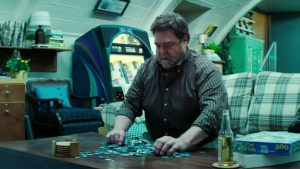 ***Warning: This article may contain spoilers***

10 Cloverfield Lane is an indirect sequel to the 2008 found-footage monster movie, Cloverfield, in which New York City is attacked by a gargantuan alien. The 2016 film shares almost none of the characteristics of its predecessor, a move that may have fans of Cloverfield scratching their heads. Whether the movie was created as a sequel or the Cloverfield label was tacked on in the middle of production, 10 Cloverfield Lane is capable of standing on its own as a genuinely unnerving movie that succeeds regardless of brand recognition.

The film follows Michelle (Mary Elizabeth Winstead) who just dumped her boyfriend. As she is driving that night, she is suddenly struck by a car and rendered unconscious. Michelle eventually wakes up in a locked room tied to a cot, at the mercy of Howard (John Goodman), an aging ex-Navy veteran living in his doomsday bunker. Howard believes that the end of the world has come and that nuclear fallout has desolated the human population. Michelle, along with the bunker’s other resident Emmett (John Gallagher Jr.), don’t believe Howard, but as the film progresses they seem to think that his apocalyptic predictions may be more true than they want to believe.

Right from the start, 10 Cloverfield Lane works to set up the three main characters. It’s easy to identify with each character’s motivations, both because of the well-written script and the acting.

Winstead finds the perfect balance for the more frantic scenes; she never overacts but is always capable of selling her performance. Gallagher Jr. is perhaps the most relatable character of the trio. He acts as the bridge between Michelle and Howard, with his mask of optimism covering his own fear and regrets.

However, Goodman really steals the show, in part because of his imposing figure. What makes Goodman’s character work so well is that he’s a villain that doesn’t know he’s really a villain. He comes off more like a disturbed and desperate person. This is critical in a small-scale setting such as this where the audience is expected to sympathize with every character.

Without giving away too many spoilers, the very end of this movie is perhaps the most unnecessary part. The goal is for Michelle and Emmett to escape from Howard. When this climactic scene occurs, the movie takes an odd turn for the last fifteen minutes. It’s understandable, but blemishes the movie’s uneasy tone. It’s not supposed to matter if Howard’s theories are correct, because they’re supposed to take a backseat to the fact that Michelle and Emmett have to escape from him either way.

In the end, 10 Cloverfield Lane is a great movie with an original tone and fantastic acting across the board, and is worth seeing whether viewers have seen Cloverfield or not.