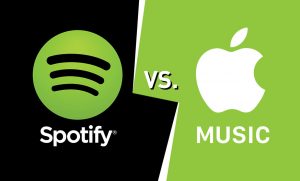 In modern life, music consumption is ubiquitous because the music itself is available anywhere. While popular music hasn’t been truly tangible since CDs were in vogue, the death of the digital download and rise of the streamed tune, coupled with increasingly omnipresent wireless networks, has enabled us to listen to exactly what we want wherever we may be.

The small, cutting edge start up got the head start and a huge slice of the pie while an international behemoth set out at a stuttered step to take its tardy share.

These two companies are of course Spotify, the privately held Swedish company, and Apple, Inc., the largest company by market capitalization in the world.

While their sizes differ greatly — Apple has 115,000 employees while Spotify gets by with a mere 1,500 — their music streaming services would appear to the naked eye (or unclothed eardrum) to offer remarkably similar things to consumers.

With major record labels licensing their catalogues to anyone who will pay the proper fee and little exclusive content being pitched by either streamer, what is the real difference in what they offer? Not much when it comes to sheer music.

But, with the available art overlapping, its curation comes to the forefront of importance. Apple acquired Beats by Dre and reworked some of its intellectual property into Beats 1 Radio, a popular part of Apple Music that features prominent artists and DJs such as Zane Lowe, and Q-Tip, and Elton John, who debuted new music on their stations to cater to specific audiences by genre. Spotify has something of a radio station, but their greatest curative feat uses algorithms to put together a fresh playlist for users each week based on their past listening habits.

Beside the curation, the services work with and incorporate artists’ views and opinions in different ways. This is something of an ethical dilemma consumers have latched onto with royalty rates derived from streamed music being so low, and pity for the starving artist being prominently shown. Apple, and even the third wheel of streaming, Tidal, have had considerably better PR in this department than Spotify, who has been criticized by artists such as Taylor Swift and Thom Yorke of Radiohead, who publicly pulled their albums off the services’ digital shelves in protest of these microscopic royalties.

Whichever service you find better suits your listening habits, make sure to utilize your special status as a poverty stricken, debt ridden college student in order to save five dollars each month. Both services are regularly ten dollars per month but offer half off to the studious poor. Now go dunk your head in the stream.