It was a star-studded event in Toronto this past weekend with the NBA All-Star festivities taking center stage. Always an exciting time for players and fans alike, All-Star Weekend 2016 certainly did not disappoint. From unlikely contest winners, to unreal dunks, and Kobe’s last All-Star appearance, there was something for everyone to get excited about. Here’s a quick recap of the weekend’s main events.

This year the NBA altered the Skills Challenge format to incorporate frontcourt players, as the game continues to evolve and big men are becoming more and more skilled. The competition, typically populated with point guards, is designed to test the player’s ballhandling, passing, and perimeter shooting. The contest was formatted as a bracket-style tournament with big men on one side and guards on the other. The final round of competition featured first-time All-Star, Isaiah Thomas, and rookie sensation, Karl-Anthony Towns. With all eyes on the crafty guard, the young center, Towns, managed to pull off the upset. While accepting the trophy, KAT was joined by fellow frontcourt participants, Cousins, Green, and Davis; showing the world that today’s NBA big men can do more than just dunk and rebound.

The NBA 3-point Contest has grown in popularity in recent years, along with the league’s shifting focus towards outside shooting. With the returning champ, Steph Curry, hitting just under five three-pointers a game this season, not many people were giving the rest of the field a chance. The final round came down to the Splash Brothers, Steph Curry and Klay Thompson, alongside Phoenix Suns’ rookie, Devin Booker. Booker shot first, but only totaled 16 points in the final round. Next up was the reigning MVP, Curry, who hit his first seven shots and finished the round with 23 points. Finally, Thompson was given the opportunity to do something that not many have done this year: beat Curry. Klay shot 19-for-25 and ended the round with 27 points, snatching the crown from his teammate.

Historically, the NBA Dunk Contest has been one of the most highly anticipated and exciting events of All-Star Weekend. However, in recent years the contest had lost its intrigue to many fans. This year’s competition certainly brought the excitement back with what many are calling the greatest dunk-off of all-time between Zach LaVine and Aaron Gordon. With Barton and Drummond both disappointing, the real show took place in the last round between LaVine and Gordon. After two perfect scores for both participants in the final round, two extra dunks were needed to crown a winner. While LaVine eventually walked away with the trophy, it was Gordon who had the highlight of the night as he jumped over his team mascot, put the ball between his legs, and threw it down with authority.

The All-Star Game has long been an exhibition in defensive futility, with this year’s game really exemplifying that fact. The Western Conference defeated the Eastern Conference by a score of 196-173, in what was the highest scoring All-Star Game in league history. Oklahoma City point guard, Russell Westbrook, finished with 31 points, eight rebounds, five assists, and five steals; becoming the first player in league history to win the All-Star Game MVP outright in consecutive seasons. In his final All-Star appearance, Lakers’ legend Kobe Bryant played 26 minutes and left to a well-deserved standing ovation from the crowd in appreciation of everything he has done throughout his career for the game of basketball. 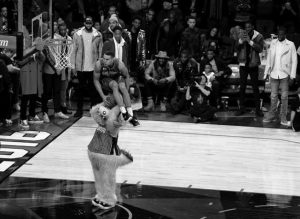