The free agent frenzy has officially taken over the baseball world with some big names swapping jerseys and looking into new real estate.

Coming off the best year of his decorated career, RHP Zack Greinke signed an unprecedented 6 years/$206 million contract with the Arizona Diamondbacks. With this deal, Greinke will earn the highest annual salary in MLB history with over $34 million a year. While it’s easy to say the Diamondbacks overpaid in this situation, they can rest assured that they are getting one of the very best the game has to offer. In his last three seasons with the Dodgers, Greinke went 51-15 with a 2.30 ERA. With the addition of Greinke, and RHP Shelby Miller via trade, this Arizona team is poised to compete in the NL West next season.

After being traded to Toronto midseason, LHP David Price was absolutely remarkable down the stretch going 9-1 with a 2.30 ERA and earning himself a 7 years/$217 million contract with the Boston Red Sox. This deal makes sense on both sides as Boston has been in search of an ace to remedy their starting pitching woes and Price has been dominant in his career at Fenway Park going 6-1 with a 1.95 ERA in 11 starts. In 2016, the Red Sox will look to go worst to first once again in what should be a very competitive AL East.

The Chicago Cubs have shown their fans they are officially in “win now” mode with their aggressive offseason approach landing them two high caliber players in OF Jason Heyward and 2B Ben Zobrist. With a bevy of young talent and NL Manager of the Year Joe Maddon, the Cubs have once again become an attractive destination for free agents. Heyward, 8 years/$184 million, is a legitimate five tool player and one of the best defensive outfielders in the league. Zobrist, 4 years/$56 million, is one of the most versatile players in baseball with the ability to play multiple positions and hit from both sides of the plate. Since 2009, Zobrist ranks 5th among position players in Wins Above Replacement and has flown under the radar as one of the league’s best. These two additions to what was already a dynamic offense makes the Chicago Cubs a legitimate World Series threat in 2016.

Looking to keep pace in the NL West, the San Francisco Giants signed RHP Jeff Samardzija to a 5 years/$90 million contract. 2015 was an odd year for the Giants as they strayed from their typical pitching and defense mentality and became a team reliant on offense. With Madison Bumgarner as their only reliable starter, the Giants will look to “The Shark” to bolster this ailing pitching staff. However, Samardzija is one of the most overrated pitchers in baseball, currently earning $18 million a year despite a career 47-61 record and 4.09 ERA.

With huge contracts being handed out around the league, there are still plenty of big name players on the market. World Series champion, RHP Johnny Cueto, is likely to receive a contract similar to Greinke and Price with such a premium being placed on acquiring an ace. There’s a ton of unsigned power still available with sluggers OF Yoenis Cespedes, OF Justin Upton, and 1B Chris Davis all looking for new contracts. We’re also waiting for some valuable veterans to find new clubs with 2B Daniel Murphy, OF Dexter Fowler, and OF Alex Gordon still testing the waters of free agency.

It has already been an active and exciting offseason as baseball fans everywhere are anxious to see if their team can land a big name player before heading into next season. 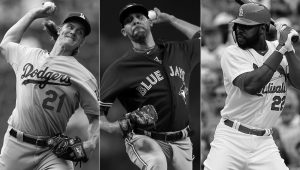