WARNING: This article may contain spoilers. 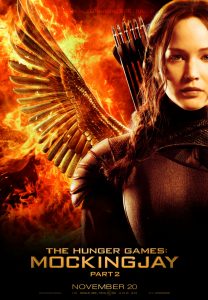 Mockingjay Part 2, the fourth and final installment of The Hunger Games movie franchise, released in theaters on November 16 to major hype. It’s been a year since Part 1 released, and the tension has been mounting for fans of the series. In Mockingjay Part 2, Katniss, Peeta, and Gale begin their final assault on the Capital and President Snow. Overall, this movie delivers what the fans have been waiting for.

While the series has always been shown as a dark and unforgiving look at life under a totalitarian regime, it is no-holds-barred in Mockingjay Part 2. It is by far the most violent and depressing film of the series, with numerous characters being brutally murdered with little to no time given for Katniss and her allies to grieve. In some cases, the deaths feel simply thrown in to showcase a particular computergenerated effect. On the other hand, some of the deaths in this movie are given the perfect amount of time that they deserve. There are death sequences in the film that are honestly cruel for both Katniss and the viewer.

The stakes are very high throughout Part 2, and the middle to near end of the movie does a good job of setting up a wavelike sense of urgency. The tension becomes palpable as Katniss and her group cautiously make their way through the Capital in their attempt to reach President Snow. Scenes will flow from quiet and uncertain to chaotic and desperate, but the entire sequence of events still feels connected.

As far as acting goes, Jennifer Lawrence once again does a great job as Katniss. She never overacts, and she has gotten over the “Kristen Stewart Syndrome” that she suffered from in the first film. Her demeanor at points is downright cold, and all of her words and actions feel believable. Josh Hutcherson does a fine job as Peeta, and aptly handles his struggle with dual personalities. Donald Sutherland unsurprisingly nails his role as President Snow, the manipulative and confident President of Panam.

Unfortunately, some of the series’ main problems are still present in Mockingjay. The first third of the movie has segments that are almost painfully slow and drawn out to intentionally increase the film’s length. It feels as if the beginning of this movie could have been tacked on to the end of Part 1, but that would have unfortunately made Part 1 even more sterile and unfulfilling.

There are at least two instances where Katniss misses a tension-filled event because she blacks out from pain. She suddenly wakes up in a hospital, and is told everything that she missed by either Gale or Haymitch. These particular scenes may work better in the books, but at this point in the franchise it’s obvious that these “black out and wake up” scenes are used to shove a lot of exposition into a just a few minutes.